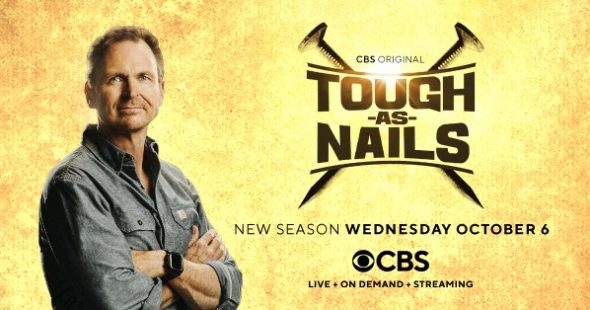 Last season, CBS used Tough As Nails to help fill the Wednesday night schedule while Survivor was absent. The series isn’t a hit but has still performed pretty well in the ratings and has already been renewed for a fourth season. How will it do this time around, with popular Survivor as a lead-in?  Stay tuned.

A competition series, the Tough As Nails TV show is hosted by Phil Keoghan of The Amazing Race. The series celebrates everyday Americans who roll up their sleeves and don’t think twice about working long hard hours and getting their hands dirty, in order to keep their country running. In the show, competitors consider the calluses on their hands a badge of honor and are tested for their strength, endurance, life skills, and most importantly, mental toughness in challenges that take place at real-world job sites. Even after they “punch out” of the individual competition, they will have the opportunity to win additional prizes in the team competitions that continue throughout the season. At the end of the season, the winning individual contestant will be crowned as the Tough as Nails champion and will win big prizes. Competitors this season are Kelsy Reynolds, Christine Connors, Takeru “Tak” Tanabe, Jerome Kupuka’a, Lamar Edwin Hanger, Lia Mort, Dequincey “Quincey” Walker, Kalimba Edwards, Mike Shaffer, Elizabeth Rillera, Sarah Ham, Alfredo “Alfie” P. Rivera.

12/9 update: You can see the latest night’s ratings in context.

For comparisons: Season two of Tough As Nails on CBS averaged a 0.46 rating in the 18-49 demographic and 3.20 million viewers.

What do you think? Do you like the Tough As Nails TV series on CBS? Are you happy to know that it’s been renewed for a fourth season?