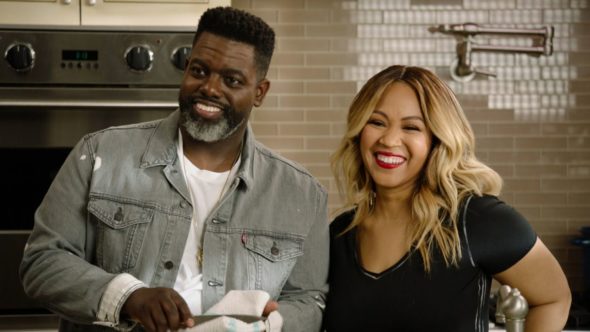 Can I get an amen? TV has announced its new We’re the Cambells TV show will premiere on Tuesday, June 19, 2018 at 8:00pm ET / 7:00pm Central. The series follows Gospel entertainers Warryn and Erica Campbell, and children Krista, Warryn, and Zaya, as they try to balance work and family life.

A TV One reality TV series, We’re the Campbells features Warryn, a pastor and music producer, and Erica, half of the Gospel duo Mary Mary. The show also features Erica and Warryn’s mothers, Thomasina “Miss Honey” Atkins and Sandra “Momma” Campbell. Learn more about We’re the Campbells from this TV One press release.

New Series and Online After-Show Content to feature Warryn and Erica Campbell as They Balance Their Family, Church Ministry and Careers

SILVER SPRING, MD – May 16, 2018 – TV One is set to premiere its latest original docu-series, WE’RE THE CAMPBELLS on Tuesday, June 19 at 8 p.m. ET/7C. The nine episode docu-series will give viewers an intimate glimpse into the lives of Gospel entertainment power couple Warryn and Erica Campbell, as they tackle the everyday struggles that come with balancing family and work, nurturing their marriage, building their individual careers, and fostering their faith; all while raising their three children Warryn, Zaya and teenager Krista. TV One will also feature the couple in its ongoing online series #BLACKLOVE and a digital exclusive after show …WITH WARRYN & ERICA. The weekly online companion content will get up-close-and personal with Warryn and Erica, as they reveal how they have dealt with common issues that could make or break any relationship.

The patriarch of the family, Warryn Campbell, is an award-winning veteran music producer for today’s most influential artists, Pastor of the California Worship Center, and founder of the record label My Block Inc. When Warryn is not leading prayer and worship service, he is mentoring his upcoming music artists.

“I am excited to let people in and share our family’s story,” said Warryn. “It is super important that folks will get to see a strong, beautiful Black family, a loving couple and nothing but the Hand of God and the Grace of God on our lives through everyday situations both good and bad.”

Dividing time between her family’s life in Los Angeles and her work life in Dallas, Erica Campbell is not only a doting wife, mother and sister, but also a host of the popular nationally-syndicated program Get Up! Mornings with Erica Campbell on Reach Media, which she tapes daily. In addition to these roles, she is also one-half of the award-winning Gospel music duo Mary Mary, writing a new book, promoting her hair extension and wig collection and serving as First Lady of the family church.

“We are a normal family that wants a healthy relationship with healthy and happy kids that will impact the world,” says Erica. “I think families will see us deal with the same things they encounter in life. I’m so very excited.”

“Getting an inside look into a close-knit, powerhouse family like The Campbells is a rare privilege,” says Tia A. Smith, Sr. Director of Original Programming & Production for TV One. “Audiences of all ages will identify with this docu-series and see themselves in members of this family, as they deal with the same issues we all do and get through them with humor and humility.”

As Gospel musicians, raising a family in the spotlight and dealing with issues of faith, sexuality and societal norms in the age of social media can be a challenge. WE’RE THE CAMPBELLS highlights the Campbell family on an intimate level, as well as introduces the large circle of family and friends that help keep things running smoothly, including Thomasina “Miss Honey” Atkins and Sandra “Momma” Campbell, the loving and often opinionated mothers of Erica and Warryn.

WE’RE THE CAMPBELLS is produced for TV One by Entertainment One (eOne). Executive Producers are Tara Long, Mark Herwick, Kim McCoy, Warryn Campbell and Erica Campbell; Co- Executive Producer is Narvin Russaw. For TV One, Tia Smith is the Executive in charge and Sr. Director of Original Programming & Production; Donyell Kennedy McCollough is Sr. Director of Talent, and Robyn Greene Arrington is Interim Head of Original Programming and Production.

For more information about TV One’s upcoming programming, including original movies, visit the network’s companion website at www.tvone.tv. TV One viewers can also join the conversation by connecting via social media on Twitter, Instagram and Facebook (@tvonetv) using the hash tags #WERETHECAMPBELLS and #REPRESENT.

What do you think? How do you like the sound of the We’re the Campbells TV series? Do you think you’ll check it out on TV One, this summer?