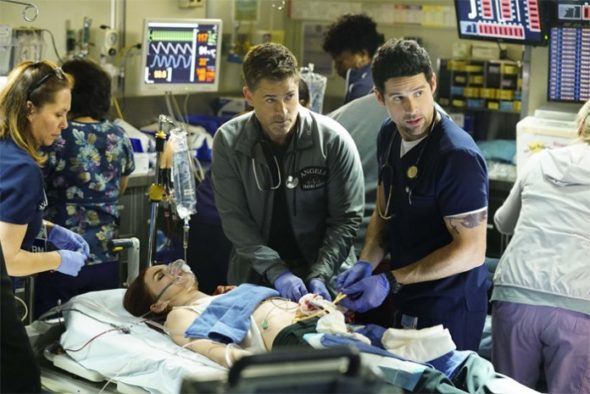 This evening, we must say goodbye to the Code Black TV show after three short seasons on the air. Series get cancelled all the time — mostly due to low ratings — but, did this Wednesday night series deserve the ax or, should it have been renewed for a fourth season instead?

Debuting in September 2015, the first season of Code Black averaged a 1.27 rating in the 18-49 demographic with 7.11 million viewers. It was a middle-of-the-road performer for CBS that year and was firmly on the bubble.

It ended up getting a second season renewal but that came with a price. In an attempt to boost the ratings, some cast changes were made and Rob Lowe (whose FOX comedy, The Grinder, had just been cancelled) joined the cast.

Unfortunately, those changes didn’t seem to help the ratings. Season two of Code Black averaged a 0.97 in the demo with 5.98 million. That was down by 23% and 16%, respectively.

The CBS series once again squeaked out a renewal but the show didn’t earn a spot on the fall schedule this time. CBS held the season three premiere of the medical drama until very late in the season.

It’s very tough to launch a season so late in the broadcast season when viewers are either wrapped up in the final episodes of existing shows or starting to shift their attention to warmer month activities. CBS might have done better to hold season three until after Memorial Day or July 4th but, they didn’t.

Season three has averaged a 0.70 rating in the demo with 5.69 million viewers. For a summer CBS show, that’s not too shabby. Compared to season two, that’s down by 27% in the demo but down by just 5% in viewership. That’s pretty rare to have such a moderate year-to-year decline in viewers. Like most CBS programs, this one tends to skew older.

Compared to CBS’ other summer shows, Code Black is doing quite respectably. In the demo, it’s outperforming scripted series Salvation and Elementary. In viewership, it’s beating all of CBS’ summer shows, including all three nights of Big Brother.

While Code Black’s ratings have not ever been stellar, it’s hard to understand why the network didn’t renew Code Black for a fourth season. They could air it during Summer 2019  so they could amass enough episodes for syndication. Perhaps that scenario didn’t make sense financially. Alas, we may never know.

What do you think? Do you think CBS should have cancelled Code Black or renewed it for a fourth season?

Love Code Black . Should not have been cancelled. Great show.

Code black and elementary should never have been cancelled! What great shows to watch. I am heartbroken! They replace the good ones with low intelligent shows. I will miss my favorite programs!

Code Black should not be cancelled. Great show with great people playing the parts.

Loved this show, would love for it to come back!

Code Black is such a good show and well written. It is much better than a lot of the “comedies” that you push at us. I personally do not watch any of them. Quality shows like Code Black with great actors and stories. It should continue!!!!

I loved Code Black ( & several other shows that was cancelled). Please bring this back.

I really liked Code Black and it is sure a lot better than Murphy Brown and The Neighborhood. Saw the few shows of The neighborhood that were aired last year and it left a lot to be desired. And as far as Murphy Brown, it should have been left dead as that is what it is. She is boring! Why not bring back Person of Interest. That was a good show. There are several others but Murphy Brown– Gag.

Please bring Code Black back! As a medical professional I loved the show!

To me, the sign of a good show (well a positive sign) is that it makes you have a reaction – whether its tears or yelling or being happy or sad, its a reaction. Code Black was one of the few shows that did this for me (This is Us being another). Why do these networks/viewers keep subscribing to trash reality shows, whilst well written and actually acted shows go by the wayside. The Networks are rubbish obviously, but ultimately they pander to the viewers mostly, so in an era of DT and the dumbing down of humanity in general,… Read more »

I liked the show, but there were so many shows that I was involved in watching, that competed for the time slot. Also, by the time they would finally begin their season, I had forgotten it was even around, and probably figured it had been canceled. Lately, they are starting so many shows, and at times during the year the public is not expecting new series. Plus there are so many new channels in the mix, that it is confusing and very frustrating. In the past, new TV seasons were greatly anticipated by most people. Now, we never know what… Read more »

In my view, it was a big mistake to cancel this series. I am miffed actually we will not see it anymore and wish someone would read comments and reconsider. While there have been many hospital series, especially with the success of Grey’s Anatomy, frankly I have moved on from that series getting too much like daytime drama, not enough of hospital and paramedic situations. There lied the quality of Code Black – while there was a part of the personal lives of the characters, as what happened with Ariel’s running away and being adopted, what happened with the doctor… Read more »

I love this show, I would love to see it back.

Why do you guys cancel good shows. Love this show please bring it back.

I enjoyed the show…….it should not have been cancelled