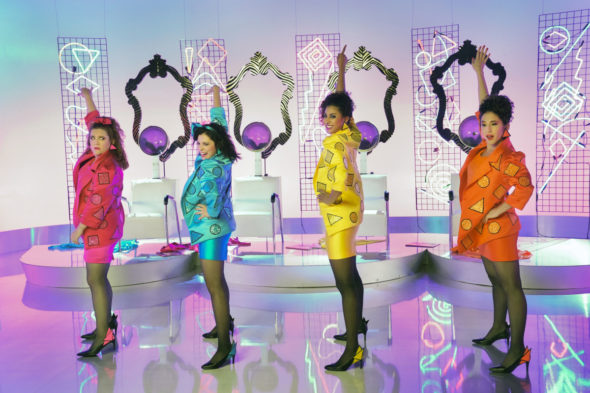 Since Josh left her at the altar last year, how well does Rebecca cope during the third season of the Crazy Ex-Girlfriend TV show on The CW? As we all know, the Nielsen ratings typically play a big role in determining whether a TV show like Crazy Ex-Girlfriend is cancelled or renewed for season four. Unfortunately, most of us do not live in Nielsen households. Because many viewers feel frustration when their viewing habits and opinions aren’t considered, we’d like to offer you the chance to rate all the Crazy Ex-Girlfriend season three episodes. **Status updates below.

This third season of Crazy Ex-Girlfriend picks up right after Josh strands Rebecca at the altar, in order to pursue the priesthood. Now everyone, including Rebecca, needs to figure out whether her attraction to him has veered into the arena of fatal. Meanwhile, handsome WASP Nathaniel Plimpton III (Foster) has drifted into her orbit, but he’s got his own issues. The rest of the West Covina crew are also struggling on their own road to happiness, and the issue of Rebecca’s mental health still remains an open question. .

What do you think? Which season three episodes of the Crazy Ex-Girlfriend TV series do you rate as wonderful, terrible, or somewhere between? Did The CW make the right choice to end Crazy Ex-Girlfriend with its fourth season? Don’t forget to vote, and share your thoughts, below.

**5/17/2018 Status Update: The CW has confirmed that Crazy Ex-Girlfriend will end with its fourth season. Details here.

I want to see Rebecca and Nathaniel finally be together, Josh to get his life together, Trent get sent to a mental institution, Valencia succeed in her event planning business with her gf, Daryl and Whijoe get back together, Heather keep being boss lady and Hector get a career and take car of boss lady or she’ll find a real man, Paula become a boss lady Lawyer!

Love the show , love that Rebecca is a beautiful full figured character and getting the hottest guys. I also love her crazy personalities. Please, please, and please make season 4 .

I hope they have at least one more season to “wrap” things up. But I don’t want to see Paula anymore… ever since her abortion storyline I have no respect for her at all (she’s selfish and killed her unborn baby)

Love this show!!! So refreshing!!!!! Please don’t cancel it…please renew for season 4!!! It is total entertainment and diversion from everyday doldrums and just love the musical parts!!!!! For me it’s laugh out loud funny and so well done!!! 🙂

I love the show so much!!! So funny and natural. So different among the rest in a great and amazing way!

scott
Reply to  Misty B Aders

Yeah, a show highlighting mental illness and stigmatisms surrounding them while also being called a musical comedy is ‘dumb’.

Mel
Reply to  Misty B Aders

Have you seen it? Trust me it is far from dumb