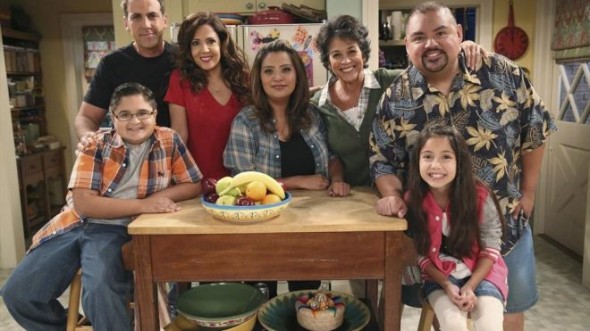 TV show description:
Created by stand-up comedienne Cristela Alonzo and Kevin Hench, this comedy series follows the life of a Mexican-American law school graduate. She dreams of becoming a lawyer, something her traditional family doesn’t quite understand. She’s entering her sixth year of law school after juggling home obligations and working multiple jobs to pay her way.

Cristela (Cristela Alonzo) lives in cramped quarters with her sister Daniela (Maria Canals-Barrera), her long-suffering brother-in-law Felix (Carlos Ponce) and their two young kids. Daniela loves her sister but balks when she tries to bring her modern views into family life. Felix resents that Cristela doesn’t pay rent and worst of all, always drinks his last beer.

The senior member of this extended family — who all live under one roof in Dallas — is Cristela’s old school mother, Natalia (Terri Hoyos). After six years of setbacks, Natalia worries that becoming a lawyer might not be in the cards for Cristela and doesn’t want her to be hurt by an unrealized dream.

Felix’s cousin and co-worker Alberto (Gabriel Iglesias) flirts shamelessly with Cristela, but the only feeling she has for him is a shared passion for the Cowboys.

Cristela’s life begins to look up when lawyer Trent Culpepper (Sam McMurray), who is unapologetically politically incorrect about Latinos and just about everyone else, offers her an internship at his prestigious firm. She’ll be working unpaid with Culpepper’s pampered daughter Maddie (Justine Lupe) and good-natured fellow intern Josh (Andrew Leeds).

Her family can’t believe she’s going to work for free. But when a turn of events shows just how effective Cristela can be when she works her lawyer knowledge for the greater good of the family, they decide it might be worth supporting her as she follows her dreams. They might not be so impossible after all.

Series Finale:
Episode #22 — Movin’ On Up
Cristela, Maddie, and Josh eagerly await the results of the bar exam. Much to everyone’s surprise, Maddie passes while Josh does not. Cristela also passes the exam and Trent offers her an attorney position at his law firm that comes along with an added perk of hiring an assistant. Faced with moving back in with his parents, Josh eagerly accepts the assistant gig. An ecstatic Cristela returns home to celebrate, but is lovingly confronted by Daniela who wants Cristela to move out and start living the life of a single girl, the life she deserves.
First aired: April 17, 2015.

What do you think? Do you like the Cristela TV show? Do you think it should have been cancelled or renewed for a second season?

I like the show and think that it is funny and different in a way that it features another culture that they get to see themselves in a featured roll that ‘s not negative. I’m not Mexican but its just a funny show to me, I hope it stays on and I will get even better as time allows. If you want to take everything so serious and nothing can be poked fun of then you are lost.

My husband and I really like this show…..Cristella’s character is Funny and really likable. She’s like an average person trying to make it. Give this show a chance its really good!!

Cristela’s relationship with her family and at the office are delightful fun to watch/
My wife and I look forward to it every week.
We’d love to see this show stay on the air.

Keep the show. I love it!

I love this show! You don’t have to be Hispanic to enjoy the family situations and humor. It is a laugh out loud comedy!

I love this show. You don’t have to be Hispanic to appreciate the family humor. It makes me laugh out loud.o

Liking the show. Cristela is really from
San Juan, minutes from Laredo. She should
act more like south texas than Cali-accent.
With that minor change, and it can be a hit.
Would love a show with real south-Texas accent. Nobody from El Valle talks or acts like that.

The show was another sit com,. playing stereo types., however the writers annoyed me stealing lines, like this one. Ah, we’ll start with one of my favorite moments by far! Lady Astor is speaking to Churchill, attempting to insult him. She states, “Sir, if you were my husband, I’d poison your drink.” Now Winston says with a boss-level reply, ” Madam, if you were my wife, I’d drink it.” Winston Churchill , really, if you are stealing lines at least quote someone less famous. Did they think people watching this show wouldn’t know?

hope it gets better cause it was not funny, the only person was fluffy…..

I love this new show. I am a 61 yr old white female and I love this and black-ish and a lot of the ethnic based shows on other channels. It is nice to see how other cultures live, especially when it actually parallels my own earlier years but with lots of jokes. I think more shows like this would show the white majority that everyone strives for the same things

That’s not what she meant. Relax. Geez.

I like the cast, and it’s an interesting premise, but the jokes are often cringe-worthy, and i’m anglo. The seem to make fun of stereotypes at the same time they act as stereotypes.

Any show with Fluffy will get me watching, but I’m looking forward to the writers hitting their stride and spreading out into real life a little.

Oh and the McCarthy’s will be the gay version

Or Modern Family, they’re pretty over the top gay from the little i’ve seen. and the Goldbergs. There do seem to be a bunch this year. I wonder who they think the audience is for these.

yay jennifer, i wanted to say something but you’ve said it well.