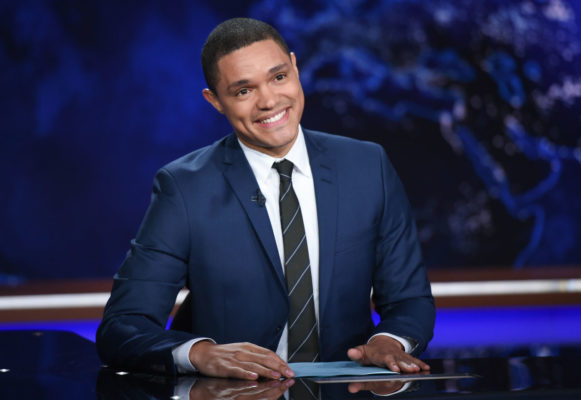 Noah, a former correspondent for the satirical news series, was named Jon Stewart’s replacement in 2015. His new deal with Comedy Central includes annual year-end specials for The Daily Show, which will begin this year.

NEW YORK, September 14, 2017 – Comedy Central and Trevor Noah have agreed to a contract extension which will keep Noah behind the desk of the Emmy(R) Award-winning The Daily Show with Trevor Noah through 2022, it was announced today by Kent Alterman, President, Comedy Central. As part of the new deal, Noah will also produce and host annual, year-end, Daily Show specials, beginning this year.

Said Alterman, “Trevor makes us look smart on a daily basis, and for that we’re grateful.”

Said Noah, “I’m thrilled to be continuing this amazing journey with both fans of The Daily Show and Comedy Central. It’s really exciting to renew this contract for either five more years or until Kim Jong Un annihilates us all-whichever one comes first.”

In addition to remaining host/writer/executive producer of The Daily Show through 2022, under the new agreement Noah will also produce and host annual, year-end specials, beginning this year. The Daily Show will no longer take for granted that humankind has made it to another December 31st and from here on out will celebrate in annual year-end specials.

Fresh off receiving his first Emmy(R) Award (for Outstanding Short Form Variety Series for the series’ “Between the Scenes” digital exclusives), and approaching the two-year anniversary of his September 28 debut, Noah finds himself at the helm of one of the hottest and fastest-growing series in the late night landscape. After setting new viewership highs during the month of August, The Daily Show is pacing to finish the 2016-2017 season as the only daily, late night talk show to post year-over-year growth in delivery among both total viewers (+14%) and Adults 18-49 (+6%), and is poised to finish the season a solid #3 in this key demographic, ahead of Jimmy Kimmel Live, Late Night with Seth Meyers and The Late Late Show with James Corden.

Across the current quarter (3Q17), The Daily Show is up +28% among total viewers vs. 3Q16, and +17% among Adults 18-49, far outpacing the only other series to show positive growth in the demo: The Late Show with Stephen Colbert (+7%), Watch What Happens Live (+6%) and Jimmy Kimmel Live (+5%). In addition, The Daily Show is on pace to overtake The Tonight Show Starring Jimmy Fallon to finish the quarter as the most-watched daily, late night talk show among millennials (Adults 18-34). Throughout the entirety of Noah’s second season, The Daily Show has posted monthly and quarterly gains vs. prior year.

For the 2017 calendar year, ratings for The Daily Show, which is carried in 133 international markets, are up +30% among all individuals, and up +10% for adults 18-34 across nine measured markets year-over-year.

The millennial host has enjoyed commensurate growth on digital platforms as well, with consumption of Daily Show content up +50% year-over-year and over 2.2 billion video views since Noah premiered as host (source: Adobe Omniture, YouTube Analytics, Snapchat, Hulu, Facebook Insights). Noah’s growing popularity across his second season is highlighted by: a massive +185% increase in video views on the show’s dedicated YouTube channel, which now has 2.5 million subscribers and nearly 600 million views since its launch last June (source: YouTube Analytic); full-episode streams, available exclusively on thedailyshow.com and the Comedy Central app, up +40% year-over-year (source: Adobe Omniture); and video views on the series’ Facebook page, up +22% (source: Facebook Insights). In addition, across the 2016-2017 season The Daily Show was the most-engaging late night talk show among its competitive set on social platforms (Facebook, Twitter, Instagram), generating the highest average engagement per post with over 57.8 million total actions (likes, shares, comments, reactions, retweets). (source: Shareablee)

Trevor Noah, Steve Bodow, Jen Flanz and Jill Katz are the Executive Producers of The Daily Show with Trevor Noah, with Justin Melkmann as Co-Executive Producer. Max Browning, Eric Davies, Pam DePace, Ramin Hedayati and Elise Terrell are Supervising Producers. Zhubin Parang is the Head Writer, with Daniel Radosh as Senior Writer. The series is directed by Paul Pennolino. Sarah Babineau is the Executive in Charge of Production for Comedy Central. Noah is represented by CAA, Mainstay Entertainment and the law firm of Hansen, Jacobson.”

What do you think? Do you watch The Daily Show with Trevor Noah? Are you glad it’ll continue for at least five more years?

I’ve never watched a complete show, but the reason is due to the never ever funny previews. I remember when late night comedians just made you laugh and didn’t use their boring shows for their political cause. Without South Park, Comedy Central would collapse into a heap of BORING.

Who’s old enough to remember when that show was funny? Trevor could have a good show but it’s not the Daily Show. Jon hated the right but was funny about it or clever- this is just horrendous now.

Ouch! 2020? His ratings aren’t that great what the hell are you doing?