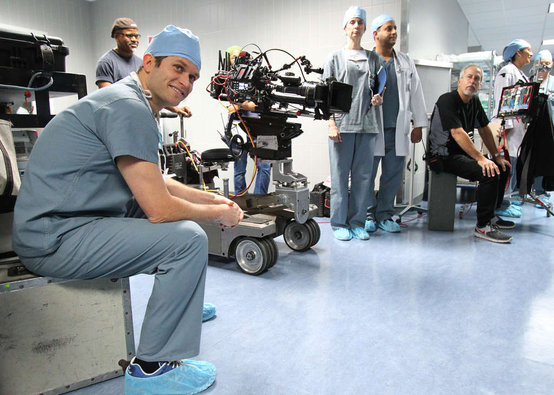 It was previously reported that NBC’s cancelled series, Do No Harm, had a dozen episodes. Apparently that intel was incorrect because the network has just released information about the show’s 13th and final episode.

Here’s the official description of the final installment which will air on Saturday, September 7th, at 10pm.

“THIS IS HOW IT ENDS”

09/07/2013 (10:00PM – 11:00PM) (Saturday) : Jason’s (Steven Pasquale) brain surgery is about to begin, a neurotransmitter implant that will “cut out” Ian (also Steven Pasquale) for good, however due to the blackout drug he has taken for years, Jason is immune to the normal anesthetic. A much stronger drug is given to Jason and in the midst of his twilight sleep he flashes back to his childhood and the origin of Ian Price is finally revealed. Meanwhile, Jordan (Michael Esper) and Lena (Alana De La Garza) are on seperate tracks to uncover Jason’s secrets all of which could prevent the surgery’s completion.

What do you think? Are you still watching Do No Harm on NBC? Do you watch live, via a DVR, on-demand, or online? Do you plan on watching the series finale?

I also watched this show on demand 1-8, and the 9th show this past Saturday. I got hooked, very disappointed it won’t be back. It deserves a second chance, it seems it got none to begin with. Time Warner dropped my Showtime, and CBS my on demand, so I could n’ t watch Under The Dome Last week. I was not blown away by the first episode of that show, but by the third, I was into it. Sometimes programs take a little time to gain their audience. Do No Harm, had me curious from the start, and I immediately… Read more »

I love this show. It gets “smarter” with each episode. Sad to see it go, I hope gets its proper close.

I love this show, I wish it was never cancelled

I love this how, of course NBC cancels all the good shows, maybe they should start canceling those reality crap shows,…This is one of the best shows on tv , soon NBS will be like ABC..

Do No Harm is an awesome show! Even if I am not home to watch it live it is always set on my DVR (I never watch TV shows live except for Showtime or HBO due to commercials). I don’t understand why NBC would cancel this show because it is very entertaining and it has a different type of story line, which is very rare these days. Honestly, how can the network executives know how a show will interest viewers after only two episodes aired in February and then aired the rest a few months later. Get real!

I really like this show. I haven’t missed an episode yet. I’m glad that NBC has decided to let the show run its course and give some sort of conclusion to the fans. I will be sorry to see it go. It’s an excellent program with a good cast and I don’t understand why it never gained much of an audience. Lack of proper promotion is probably the culprit and that is sad for all of us (NBC included).

Excellent show — will definitely watch all the episodes — disappointed it will be cancelled. Not sure who was responsible for advertising but they failed to promote the show.

Epic show. They NEED to bring this back.

My husband and I love this show…. I hate
Its not gonna be on any more 🙁

me too, maybe another network will pick it up!

I love this show. It is really good and i wish they were keeping it on. Whether DVR of live I do watch it and a very good premise.

I never even heard about this show. I saw it on demand today and watched episodes 1-8. You can’t expect people to watch a show that you do not advertise for. For crying out loud, get a clue! This is/was a great show. Better marketing and time slot would’ve made this show a must watch!