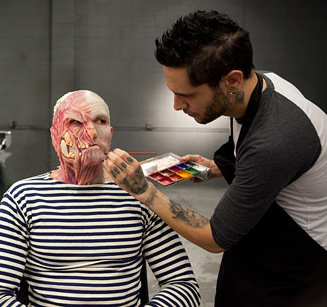 Tonight marks the season finale of Syfy’s Face Off reality series, a competition of special effects make-up artists. The cable channel is happy enough with the TV show’s performance that it’s been renewed for a second season and casting will get underway soon.

NEW YORK – March 16, 2011 – Syfy announces that its breakout reality competition series Face Off will return for a second season of special effects competition, offering a new group of rising SFX make-up artists with the opportunity to showcase their imagination and creativity. The season one finale airs tonight, Wednesday, March 16 at 10:00 p.m. ET/PT, in which the final contestants face off in a fairytale challenge that will conclude with one being named the winner of the premiere season.

Dwight D. Smith and Michael Agbabian of Mission Control will return as executive producers for the second season of Face Off. Casting for trained and self-taught special effects make-up artists begins this month. Interested applicants can go to www.Syfy.com/faceoff to download the online application form.

In tonight’s finale the final four contestants – Sam Cobb, Gage Hubbard, Conor McCullagh and Tate Steinsiek — face off in the final spotlight challenge in which they are assigned a classic fairy tale and must create their own twist on two characters inspired by the tale, and place them in a fully art directed scene. For the final judging, the fairy tale tableaus are put on display in a cocktail party setting, and the winner of Face Off is revealed. The winner will receive $100,000 in seed money to help encourage their SFX make-up career, along with a year’s supply of products from Alcone.

Face Off is a competition/elimination series exploring the world of special-effects make-up artists and the unlimited imagination that allows them to create amazing works of living art.

What do you think? Do you like this Syfy series? Glad to hear it’s been renewed?

This is by far the best reality show on television. As much as I enjoy Project Runway, this show is even better because of the incredible variety of talents, takes on make-up, mask and prosthetics creation, and complementary costuming. Each project tells a story. Congratulations to SyFy! You have a…THE…winner!

I lovE this show so glad connor won

my husband and I thorough enjoy this show… keep it coming. It’s refreshing to see the contestants putting their visions into place and knowing they aren’t “professionals” just yet – some of their potential is fabulous.

This is the -only- show I watch on SyFy. The rest are hokey and terrible, despite my love of fantasy, sci-fi, and horror, and it’s pretty sad a competition reality show is the only thing to grab my interest. But in the realm of competition reality, this one is one of the absolute best! Just…stay away from the whole “romantic entanglement” twists and I’d be much happier. Very pleased to see it come around again for a new round!

That show was awesome….though I think Tate should have won. Either way I am so glad it was renewed and I am looking forward to it. No if they would get another season going for Firefly I’d be all set.

I love the show and im glad to see it will be back for another season and hopefully many more to come!!!!!!Thank You SyFy…….

My 7yr old daughter and myself stumbled across this show and we LOVE it!It’s so amazing to see exactly how much work, creativity and talent goes into completing costumes. Now we know who and what really makes the show :-)Although, the start time is somewhat late in our area that’s the purpose of a DVR. I believe watching this show has helped her to overcome her fears between deciphering real & make believe. Not to include, being inspired to learn. We can’t wait for the next season.

i loved the show …. always psyched me to see what are there gonna do next ……..

I loved watching this show, and so glad Canada was able to acquire it for our Space channel.

I AM SO GLAD THEY ARE GOING TO DO A SECOND SEASON OF FACEOFF. MY 8 YEAR OLD SON AND MYSELF LOVE THE SHOW. IT HAS REALLY GOT HIS IMAGINATION GOING. WE HOPE FACEOFF HAS MANY MORE SEASON’S TO COME

So happy that this show will be coming back…………..wonderful artistry!

Face Off is a great reality competition show. And I’m going to tell you why, because it’s all about behind the scenes work on movies and television shows for once. Forget the dancing, acting, and singing competitions. I’m way more into ones like Face Off where they show what goes into the things that can help a movie/show look so much better. I find it very intriguing and fun, I hope it goes on for several more seasons. Maybe Hollywood will take a hint and make more competition shows like Face Off.

In light of all the other **** Sci-Fi puts on their station this is a welcome addition and at the very least, relevant to the ******* station. Now with any luck they’ll dump all this wresting nonsense then can Ghost Humpers and all the other absurd trash that have ruined the channel over the years.

I love this show, I also love horror movies so it’s fun to see how these kind of costumes are made and it’s fun to see what they have to come up with every week in the challenges.

The other nice thing about this show is there isn’t the same “reality drama” nonsense on this show. This show is about the costumes and designs and how they are made and that’s what it stays focused on. I hope it stays this way for next season.