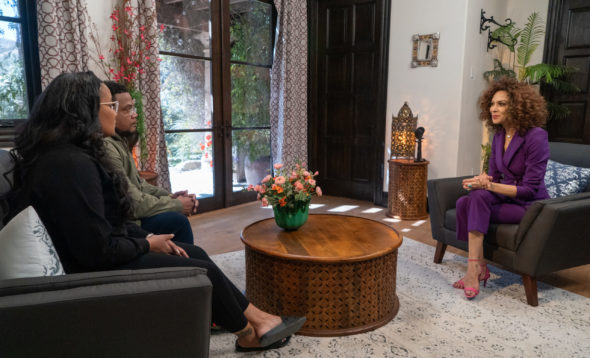 Family or Fiance and Love & Marriage: Huntsville are returning to OWN with their second and third seasons, respectively. The cable channel has announced a July 17 date for premieres of the new seasons of the relationship series.

OWN revealed more about the return of both reality shows in a press release.

“OWN: Oprah Winfrey Network announced today the second season of its popular relationship series Family or Fiancé, premieres on Saturday, July 17 at 10:00 p.m. ET/PT, following the season three premiere of Love & Marriage: Huntsville. Hosted by relationship coach Tracy McMillan, Family or Fiancé follows engaged couples who bring their disapproving families together for three days under one roof. In this high-stakes social experiment, couples and their extended families participate in activities designed to strengthen bonds, explore differences, and see their relationships in a new way. The series is also available to stream the same day on discovery+.

This season relationship coach Tracy McMillan returns to work with engaged couples desperately seeking the blessings of their loved ones. The couples will navigate relationships between mothers and daughters, sisters and brothers, broken families, tragic loss, and non-traditional marriages. At the end of three days spent together completing tasks and coaching sessions, the families will decide whether they can bless these unions, or if their reservations and concerns about the marriages will persevere. Then, the couples must decide whether they will choose their family or their fiancé when planning their future.

Check out a sneak peek for Family or Fiancé season two below.

What do you think? Are you a fan of these reality shows on OWN? Will you be watching in July?