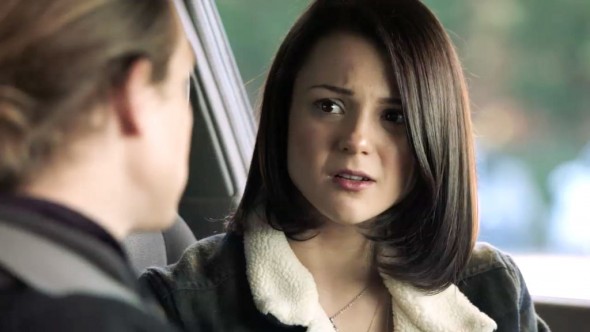 The second season of MTV‘s Finding Carter TV show ended on a cliffhanger, with Tuesday’s season two finale episode, “Atonement.” Since MTV has neither cancelled nor renewed Finding Carter, as of yet, will fans also be left hanging?

Finding Carter‘s season one ratings averaged a 0.50 in the 18-49 demographic, with an average total audience size of 1.14 million viewers.

We have been tracking MTV ratings for the following scripted shows: Awkward, Eye Candy, Faking It, Finding Carter, Happyland, Scream, and Teen Wolf. Of those shows, Finding Carter is the only one with an undecided future.

With a third season up in the air, The Hollywood Reporter talked to Finding Carter Executive Producer Emily Whitesell about the change in the show’s focus during season two, and where the series might go, if Finding Carter is renewed for season three.

Warning: the following contains spoilers for the season two finale.

What was the feeling in the writers room when you were planning out how this season would end, not knowing if you’d come back for a third season?

It was, ‘What would be a good cliffhanger-y push?’ If we were going to continue, what would be interesting to leave everyone hanging and holding on, and what does our audience care about? And what would we like to see? And then try to get a consensus from the network about what they would care about as well. We came up with many, many different ideas and this was the one we all agreed on.

Now that Max turned himself in to the police for killing Jared to protect Carter, what does that mean for him going forward? Would the potential new season focus on his legal battle to stay out of jail?

I don’t personally think that the audience would be hugely interested in watching a giant legal battle with Max on TV. […] And as we know from this show, there are a lot of ways that a trial could go. So we have a lot of choices about how to deal with it from the emotional feelings that Max would have about the whole thing and legally as well.

His confession also signaled a divide between Carter and Taylor, since they each wanted different things for him. Would we see their relationship fracture even more next season?

The moral choices they were willing to make in the moment represent the rift between them. They’re incredibly close but they have all kinds of baggage between them, especially where Max is concerned. It would be interesting to delve into that between the two of them and give us a way to complicate their relationship.

The finale revealed Crash (Caleb Ruminer) lied to Carter about seeing someone, since he’s still in love with her. Will next season focus on their relationship again?

We didn’t want to discount everything Carter went through and how deeply she felt for Jared. But we all have that person that is our rock and the feelings between them never went away. Every time she had a doubt about Jared, she always went back to Crash. And who Crash has become is the ideal person she would want to love. They have a very deep bond and I’d love to play with what that means to her moving forward.

Ben (Ben Winchell) was left pretty much for dead by the end of the finale after getting into a fight with his drug dealer boss. What would his story look like going forward?

[…] We ended up knowing that he has a great heart, and it really is just the circumstances that made him act the way he did. We’re on his side, but he’s been sucked back into this life in a way that he may not get out of. Will he triumph eventually? I wanted to leave it up in the air. It could go either way with him.

How do you feel about the state of scripted shows on the network in the wake of programming president Susanne Daniels’ departure, and where does Finding Carter fit in?

I don’t really involve myself too much in the politics of the network. I’m more of the creative end. So if the show is picked up and they need it to go in a certain creative direction, I’ll pitch them where I think the show should go. But I don’t get involved in how they’re feeling about what shows they want to pick up or not.

How do you feel when showrunners know a show’s fate is still up in the air, but end a season on a cliffhanger? Should they tell their stories they way they want, or give fans some closure, just in case? Should Finding Carter be cancelled or renewed? Tell us.

Please renew can’t leave us hanging like that and I thought it was good .please renew

Please renew the show!! Its was awesome! We have to know what will happen with max and taylor, carter, ben and the others. It cannot end like this. I really don’t think it is fair for the fans who watched every episode and than to be left in this cliffhanger. It shows a total disregard for the viewers. OUR QUESTIONS HAVE TO BE ANSWERED!!