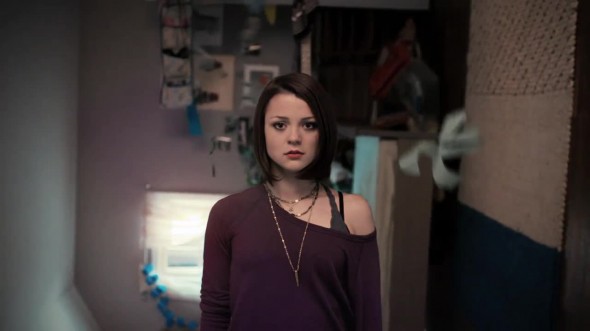 MTV has renewed their Finding Carter TV show for a second season. Seen on Tuesday nights, the dramatic series is averaging 1.25 million viewers in initial airings. The first season finale is expected to air on September 16th.

On Finding Carter, a teenager (Kathryn Prescott) discovers that her beloved single mom actually abducted her as an infant and she’s reunited with her birth family. The cast also includes Cynthia Watros, Anna Jacoby-Heron, Alexis Denisof, and Zac Pullam.

“The creative minds behind ‘Finding Carter’ did an exceptional job bringing this story to life and drawing our audience in,” said President of MTV Programming, Susanne Daniels. “I’m looking forward to another season following Carter on her journey.”

In tonight’s episode, entitled “Half Baked,” Carter and Taylor discover Elizabeth’s affair and team up to force their mother to come clean. But when this revelation threatens to destroy the Wilson family, Carter must decide whether she’s willing to do the unthinkable in order to bring the family back together. “Finding Carter” airs Tuesdays at 10:00 p.m. ET/PT on MTV. Click here for a look at the Mid-Season Trailer.

“Finding Carter” continues to experience strong ratings lifts with live+3 viewing. On average, the series garners a nearly 70 percent increase when accounting for three days of delayed viewing. Episode five more than doubled its rating with a 111 percent lift (1.9 vs. 0.9), episode six jumped 82 percent (2.0 vs. 1.1) and last week’s episode increased 100 percent (1.8 vs. 0.9).

“Finding Carter” is the #1 streamed new series on MTV.com and in the MTV app with over 5 million streams in 2014. #FindingCarter and #NewFindingCarter have been number one USA and Worldwide trending topics each week. Socially, the show has over 17 million Twitter impressions to date and over 62 million Facebook impressions to date.

“Finding Carter” is an unconventional family drama that centers on Carter, a teenage girl who thinks she has the perfect life until one night after a police bust at a high school party she is told that the woman who she believes to be her biological mother actually abducted her as a toddler. Now Carter must return to the family who thought they had lost her. As she navigates brand-new parents, a twin sister, high school and boys, Carter vows to find Lori before the police capture the only mom she’s ever known and put her behind bars.

What do you think? Have you been watching the Finding Carter TV series? Are you glad that it’s been renewed or, do you think it should have been cancelled instead?

Correction, »» depending on ° HOW the writers do an ending.°

This is a great tv show. It would also make a great movie Saga depending on hope the writers do an ending. I am looking forward to season 3 in 2016. 🙂

The tv show is reneweamd. This is an old thread that you are replying too, they are soon coming into season 3.

Bring it back it’s a good show. Maybe if you put in a Different time slot This a good show I don’t guess it has enough raw sex. Oh I am 58 years old.