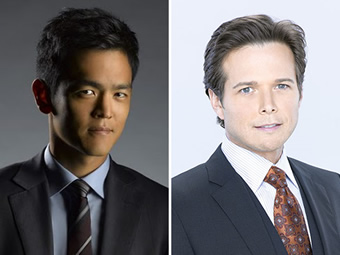 We’ve received quite a few comments and emails from readers who can’t believe that FlashForward was cancelled when another ABC show, V, was renewed?

On Tuesday, ABC Entertainment President Steve McPherson explained the difficult decision this way, “It was a ‘Sophie’s Choice.’ In the end, FlashForward didn’t engage audiences like we hoped. For V, I get more anecdotal calls and emails than any other show on the schedule. A huge part of rebuilding the network is about taking chances. Some shows just don’t work out.”

While that sounds very nice, ultimately the decision to renew or cancel any TV show comes down to ratings.

FlashForward premiered with a strong 4.0 rating in the 18-49 demographic and 12.47 million viewers. Viewership quickly declined though and has been steadily falling. The two most recent episodes have fallen to a 1.3 rating and about 4.8 million viewers. That’s terrible for a network show.

So, while both shows have indeed been struggling, V is still doing quite a bit better than FlashForward (though certainly not great). ABC tends to save one or two struggling shows each season and V was their choice this time around. FlashForward’s ratings were just too low.

V is set to return in early 2011, or possibly as early as November 2010. The four month hiatus really hurt V’s ratings this season. You have to wonder if a six or eight month hiatus will kill it altogether this time?

What do you think? Which show did you prefer? Why do you think that FlashForward’s viewership has dropped so low? Will the long break between seasons kill V?

Do not Drop FlashForward, Its a great show, kinda a make sense, Bring it back to air, Lots of question dangling in my head about the show.

V can make it if you just put it out we want to see the conclusion. Do just dump it and leave us hanging.

I hate that both are going off air. I loved both of these two shows. You know, life is so hard and if you have only a 30 minute flash into another world (not your own) to escape, it is worth it! We need more shows like these. I grew up with Star Trek, so am a scifi enthusist. Please reconsider these shows and bring them back. Not sure why people didn’t watch, but everyone I have talked to LOVED these shows! Please reconsider.

Flashforward was a great show, my family and i would sit down every night and watch an episode, and then go to the next. Even though v sounds like a likeable choice i think that ff should have made the cut. I just hate it when they leave us hanging, leaving a good TV show at a cliffhanger. it drives me crazy. Just like the cape. Flashforward should have made it.

It was the worst remake/reimagining to ever grace the small screen, everything about it stank, Abc and all involved were totally clueless.

nick u need to get a life

This show IS probably the greatest show I’ve ever seen. Why would they cancel a show on the 1st season when it has potential? I just got started getting attached to the show, and then BAM… it’s cancelled. I hope they renew the show because I will implode if they don’t.

B R I N G I T B A C K. (Flashforward) networks need to start taking into account online views… I thought we were in more modern times where the internet brings the world closer. So why not count it in its rating system. Who ever is in charge of this “rating” system should be beat….. online….

So glad to hear “V” is coming back! Excellent show. So different than anything else to tv. Can hardly wait to see what happens to Anna! As far as Flash Forward…never have seen that much of it…it’s all a matter of opinion which show is better. I am sorry it was canceled, since it had it’s own fan base.

V is awesome! PLEASE renew it!!! It’s too good to lose!

Neilson ratings are a crap way of gauging a shows popularity. I don’t watch ANYTHING live. Everything I watch is recorded on my PVR. Not because I hate commercials (which I do) butbecause I’m almost never home when shows air. and when I am, I am often doing other things, like cooking, spending time with the wife, playing with my dog, house chores. I only get to watch shows late in the evening or the odd time during normal hours. I don’t usually watch full episodes though, because, again, life gets in the way (PVR saves the day again for… Read more »

I grew up with the original series V and I love what they have done with it to refresh the show…Bringing back Marc Singer is going to be awesome… Networks really should put out web polls to gauge who is watching what, because for all they know the shows are being watched on DVR after the actual airing… This neilson crap has got to stop, technology has gone far beyond that now, time to listen to the people period!

I too grew up with the original series of V and loved it as I love this new series. I loved Flashforward also, but am totally hooked on V. I hate that we have to wait until it starts again. Please do not take this show off the air!!! I agree the Neilson ratings should be done with, I DVR most everything so I can watch it when it’s convenient. I watch V live but also DVR it in case I miss the first half. Lets get with the 21st century.

i was mad that flashforward got cancelled, the plot was just beginning to grow on me. I didnt care too much for V, but now halfway through the second season, I enjoy it. even if the cgi is underwhelming.