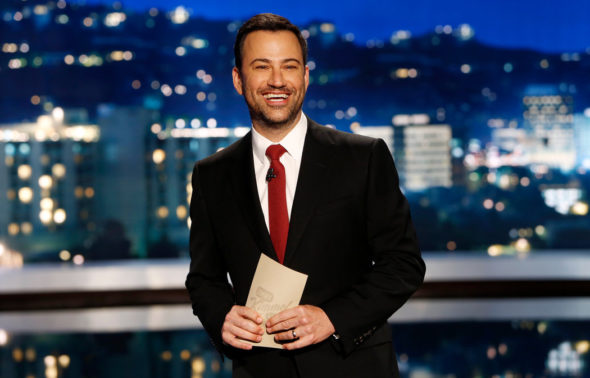 Is Jimmy Kimmel Live! ending? Recently, ABC boss Karey Burke spoke with The Hollywood Reporter about the future of the TV show.

Notably, this year is Kimmel’s last contracted year for Jimmy Kimmel Live!. However, ABC boss Karey Burke says fans don’t have to worry. The network is in talks to keep Kimmel on for at least a few more years:

What do you think? Do you watch Jimmy Kimmel Live!? How much longer do you think the show should run?

Jimmy’s political humor is what keeps me going. With Jon Stewart gone, it is great to have someone like him take on Trump. I love him.

I absolutely love Jimmy Kimmel! He and Stephen Colbert are the only way I can tolerate hearing political news. PLEASE keep him on the air for as long as possible!

keep him? why? His ratings suck and are only getting worse….in another year, a test pattern will get better numbers

Quit watching Kimmel when politics began to dominate the show and his hate for Donald Trump made Kimmel unbearable to watch.

I used to find Jimmy’s show funny , but now he is so negative and political that it brings me down. I’d be fine if it goes off the air. Maybe ABC could try someone new.

ABC is a loud mouthpiece for the left. Quit watching ABC long ago.

I love Jimmy Kimmell, I just wish there were more live shows. Seems like there are 3 reruns a week! MORE LIVE KIMMELL PLEASE <3