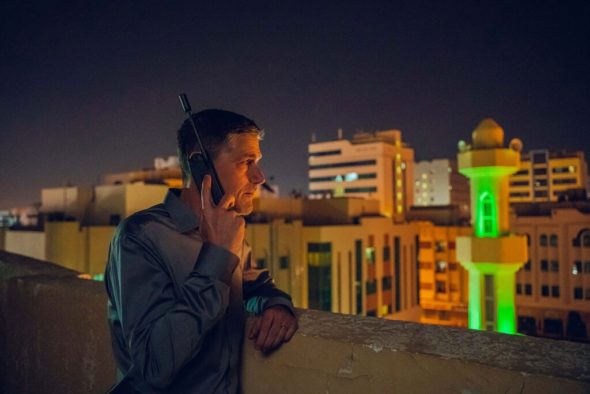 Last Light is coming to Peacock, and the new show brings Matthew Fox (Lost) back to the small screen. Based on the novel by Alex Scarrow, the thriller series tells the story of what happens when the world loses its oil supply. The series also stars Joanne Froggatt Alyth Ross, Taylor Fay, Amber Rose Revah, Victor Alli, Tom Wlaschiha, and Hakeem Jomah. All five episodes of the limited drama will drop on September 8th.

Petro-chemist Andy Nielsen knows how dependent the world is on oil; if something were to happen to the world’s oil supply, it would set off a chain reaction: transportation would grind to a halt, supplies would cease to be delivered, law enforcement would be overwhelmed.

While on a business trip to the Middle East, Andy realizes that his worst fears are coming true and his family is separated at this crucial moment. His teenage daughter, Laura, is alone at home in London while his wife, Elena, and young son, Sam, are in Paris.

Amid this chaos, each family member will sacrifice everything to find one another, despite the distance and the dangers that separate them. Based on Alex Scarrow’s best-selling novel of the same name.

Dennie Gordon, an executive producer, and director for the drama, also spoke about the series:

“I am so excited to share this work with all of you. This project has been a career high for me; the ability to tell an important story with an international team of actors and artists, with MGM International Television Productions and Peacock, a studio and streamer that has allowed me tremendous creative freedom.

We knew that we were telling a ripped from the headlines story. But we didn’t realize that things would escalate as they have, and that we would be living all these events as we were shooting in real time.

Our thriller is told against the backdrop of a family separated by world events, and I was privileged and thrilled to have Matthew Fox come out of retirement for this special series.

We had a couple of intense obstacles while making this including shooting during the heights Covid. But I speak for all of us when I say we each gave 1000% every single day because this was a labor of love that meant so much to all of us.

I was deeply inspired by Alfonso Cuarón’s brilliant film CHILDREN OF MEN, a scenario we can envision just around the corner. And like that film we hope to give our audience a shred of hope at the end; what is possible if we all come together to affect change???

Thank you for your interest in LAST LIGHT. I hope you will connect with Andy Yeats and his family, and we hope that this series will start the conversations we all might have about our dependency on oil and how we survive climate change.”

Check out the trailer for Last Light below.

What do you think? Are you planning to check out Last Light on Peacock next month?