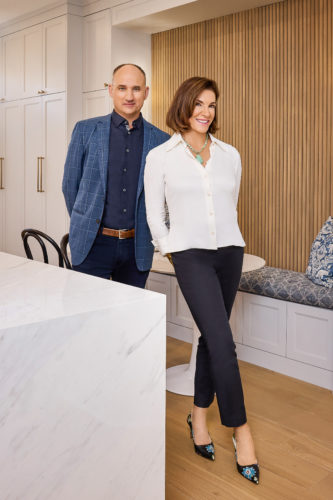 Love it or List It is returning for a new season on HGTV. The cable channel has renewed the reality series starring designer Hilary Farr and real estate expert David Visenti. The upcoming season will have 18 episodes which will be split into two parts.

In each episode, homeowners show the duo their existing home. Farr redesigns a portion of the home to fit the family’s needs and budget while Visenti shows them alternative homes they could purchase. In the end, the family must decide whether to stay in their refreshed home or to put it up for sale and move to a new place.

HGTV revealed more about the upcoming season of the series in a press release.

WHERE/WHEN: Premieres Monday, Sept. 12, at 9 p.m. ET/PT on HGTV and available to stream on Discovery+

WHO: Attracting more than 25 million viewers to its last season, HGTV’s smash hit series Love It or List It, starring designer Hilary Farr and real estate expert David Visentin, will return this fall with eight fresh episodes. The popular duo—emboldened by their signature sharp wit, funny banter and clever, competitive barbs—will help homeowners make a major, and oftentimes difficult, decision. Hilary will encourage them to love their existing home after completing stunning renovations, while David will entice them to purchase a new house that perfectly suits their family.

In a special 90-minute season premiere, Hilary will be her own client as she renovates a quaint North Carolina cottage into her dream home. The project will offer unexpected turns when she discovers a rotting foundation and termites eating through the subfloor. In true David fashion, he’ll take on the challenge of convincing Hilary to trade in the fixer-upper for a move-in ready house. After she transforms the broken-down bungalow into a home that meets her needs and David finds a place that has all the items on her wish list, Hilary will ultimately have to answer the highly anticipated question: are you going to love it or are you going to list it?

Love It or List It is produced by Big Coat Media.

What do you think? Are you excited to see more episodes of Love It or List It on HGTV?

YEESSSS SMART MOVE was so puzzled with its demise as to WHY!!?? Love it

Love them and so glad they are both coming back. One without the other just does not make the show the all time favorite we came to love and look forward to. Thank goodness on Sept. 12th things will be back to normal. Thank you!

Glad they’ll be returning. They’re a fun team to watch

why don’t you donate old fixtures instead of breaking them up and throwing it out???? People can use it!!!

Love love them…they are so funny, they are great together!

My husband and I LOVE this show..I’ve been looking for new series Now I know Sept 12th..GREAT!

I think this was a very smart decision to renew and especially keeping Hillary and David, they make the show! The concept of the show is so much better than any other home renovation show.

I love this show. Hillary does a fantastic job in renovating homes. Her best are with kitchens and bathrooms. LOVE IT ❤️

I am so excited that my favorite show and my favorite show duo is coming back with a new season! I have missed them even though I record all the reruns and still watch them. HGTV has not been the same without Hillary and David. Can’t wait for the new season!