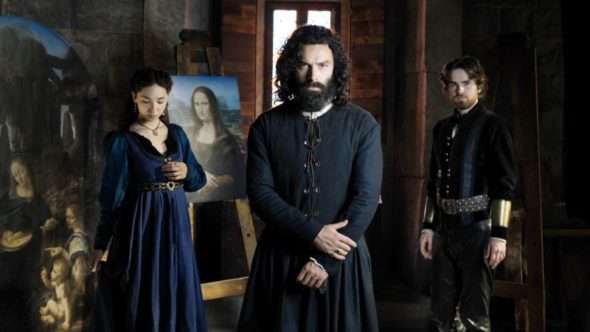 The story explores the secrets and drama behind the genius of Leonardo da Vinci (Turner) — his life, his work, and his personal struggles set against the backdrop of Renaissance Italy.

In the year 1506, da Vinci is accused of the murder of Caterina da Cremona (De Angelis), his friend and muse. Questioned by Stefano Giraldi (Highmore), an ambitious officer of the Duchy of Milan, Leonardo begins to tell the story of his life. He begins with his first meeting with Caterina in the workshop of his teacher, Andrea del Verrocchio (Giannini). Giraldi, fascinated by the artist’s personality, begins to suspect that Leonardo may be innocent and works to discover the truth.

We see da Vinci as he grows into an unparalleled genius and renowned polymath whose work overturns the established order. His restless curiosity about art, science, and technology is driven by a profound quest for knowledge and he’s determined to unfold the mysteries of the world around him. Little by little, episodes also reveal the inner torments of a man obsessed with attaining perfection.

What do you think? Do you like the Leonardo TV show? Do you think it should be cancelled or renewed for another season?

Please renewed season 2 so good Freddie Highmore need more attention love this show enjoy it and love it all love everyone on it. Never missed any episode of it.

Very few actually care about the accuracy, woeful attempt at representing an artist. Reduced to another Aidan Turner role thats all about female viewers. Junk. Whats next… Monet the musical

Agreed (and I am a woman). If they wanted to make a drama about a tortured, troubled artist who is a brooding, awkward loner but at the same time swarthily sexy, then why not make a biopic about Michelangelo? Leonardo was a handsome man, but he was blond or red-haired and fair. And if ever there was a justified opportunity to present a historical gay man as the stereotypical charming, extroverted theatre director/designer/musician (which was basically his ‘day job’ at court) who is the life of the party and doesn’t let his somewhat strained relationship with his father get him… Read more »

I love the show. The production values, writing and acting are spot on. If you love History you’ll love this one.