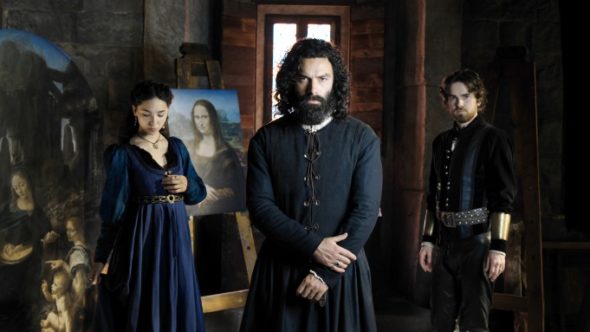 The CW is expanding its lineup of acquired series from other parts of the world. The network has picked up Italian drama, Leonardo (above), starring Aidan Turner, and Australian comedy Bump for its line-up. Premiere dates will be announced at a later time.

The CW revealed more about the additions in a press release.

LEONARDO explores the secrets and drama behind the genius of Leonardo da Vinci (Aidan Turner, Poldark, The Hobbit) – his life, his work and his personal struggles set against the backdrop of Renaissance Italy. The eight-part series follows da Vinci as he grows into an unparalleled genius and renowned polymath whose work overturned the established order. His restless curiosity flitted between arts, science and technology, driven by a profound quest for knowledge and determined to unfold the mysteries of the world around him. The series unlocks the enigma of this extraordinary man, through an untold story of mystery and passion.

LEONARDO was created by Frank Spotnitz (The X-Files, The Man in the High Castle, Medici) and Steve Thompson (Sherlock, Doctor Who) and directed by Dan Percival (The Man in the High Castle, Death Comes To Pemberley) and Alexis Sweet (Don Matteo, Back to the Island). The series is executive produced by Luca Bernabei, Daniele Passani, Sara Melodia and Luisa Cotta Ramosino for Lux Vide, Frank Spotnitz and Emily Feller for Big Light Productions, Freddie Highmore with his Alfresco Pictures, and Brendan Fitzgerald for Sony Pictures Television (SPT).

Produced by Lux Vide with Rai Fiction and Big Light Productions, in association with France Télévisions and RTVE, LEONARDO is co-produced and distributed worldwide by SPT.

Oly’s mother Angie (Claudia Karvan, Love My Way, The Secret Life Of Us) is the head of English at her inner city high school; and her father Dom (Angus Samson, Fargo, The Lincoln Lawyer) is a recently redundant executive who’s been spending nights on his moored boat. Angie and Dom are lost in their own mid-life reckoning.

At school Oly collapses in agony. She’s sped to hospital in an ambulance, accompanied by Angie, and they are both stunned – horrified! – to discover that Oly is in labor. Blindsided, in deep shock, Oly rejects the baby entirely. If she doesn’t acknowledge the baby, then she doesn’t have to acknowledge how her life has irrevocably changed, or that the baby’s father is not her boyfriend; it’s Santiago “Santi” Hernandez (Carlos Sanson, Jr., Legacies, Malibu Rescue: The Next Wave), the laid-back son of Angie’s major work crush: Chilean soccer coach Matias (newcomer Ricardo Scheihing-Vasquez).

The Hernandez and Chalmers families clash over differing expectations of family obligations and with Angie and Dom on the brink of separation already, and Matias and his wife Rosa (Paula Garcia, Little White Lies) battling their own messy household dynamic, the arrival of the baby sets off each family in different ways.

As the series develops, so does our understanding of what drew Oly and Santi together in the first place, and how it could bring them closer now – if they can navigate this sudden onset of adulthood, and if their families don’t get in the way.

What do you think? Do you plan to check out these new series when they eventually premiere on The CW?