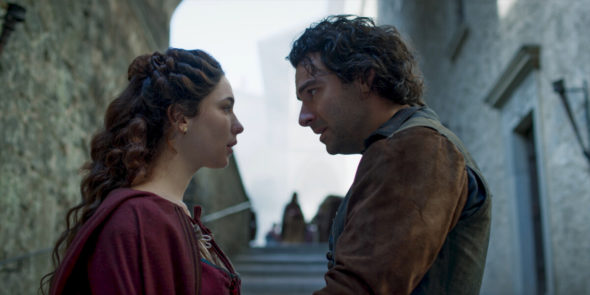 A genius’ secrets are revealed in the first season of the Leonardo TV show on The CW. As we all know, the Nielsen ratings typically play a big role in determining whether a TV show like Leonardo is cancelled or renewed for season two (it’s already been renewed internationally). Unfortunately, most of us do not live in Nielsen households. Because many viewers feel frustrated when their viewing habits and opinions aren’t considered, we invite you to rate all of the first season episodes of Leonardo here.

A historical drama series airing on The CW in the U.S., the Leonardo TV show stars Aidan Turner, Matilda de Angelis, Giancarlo Giannini, Freddie Highmore, James D’Arcy, Carlos Cuevas, Alessandro Sperduti, Robin Renucci, Flavio Parenti, Miriam Dalmazio and Antonio de Matteo. The story explores the secrets and drama behind the genius of Leonardo da Vinci (Turner) — his life, his work, and his personal struggles set against the backdrop of Renaissance Italy. In the year 1506, da Vinci is accused of the murder of Caterina da Cremona (De Angelis), his friend and muse. Questioned by Stefano Giraldi (Highmore), an ambitious officer of the Duchy of Milan, Leonardo begins to tell the story of his life. He begins with his first meeting with Caterina in the workshop of his teacher, Andrea del Verrocchio (Giannini). Giraldi, fascinated by the artist’s personality, begins to suspect that Leonardo may be innocent and works to discover the truth.

What do you think? Which season one episodes of the Leonardo TV series do you rate as wonderful, terrible, or somewhere between? Do you think that Leonardo should be renewed for a second season on The CW?

FABULOUS!! Be sure to do a Google search of De Vinci’s artwork before watching the series

Please renewed season 2 so good enjoy it and love it all episodes never missed any episode of it . Look forward to seeing it every Tuesday night at 8pm. Please reconsider it in boost your number ratings.

I too, waited patiently for Leonardo to be shown in the US. I love the show, but CW is killing it w/too many commercials. It’s difficult to maintain the storyline because of such frequent interruptions. Basically, love the show, the constant commercials, not so much.

I have been patiently waiting to see Leonardo here in the US. I enjoyed the first episode. Aidan Turner is such a great actor I knew he would take on this character of Leonardo DaVinci and do a wonderful job. I can’t wait to see more!!

This is lush and really well acted and produced. I cannot wait to see every episode and would love to see it go into another season. Even though the murder is not an actual event, everything else did happen. Aidan Turner is one of the greats and playing Leonardo suits him well.