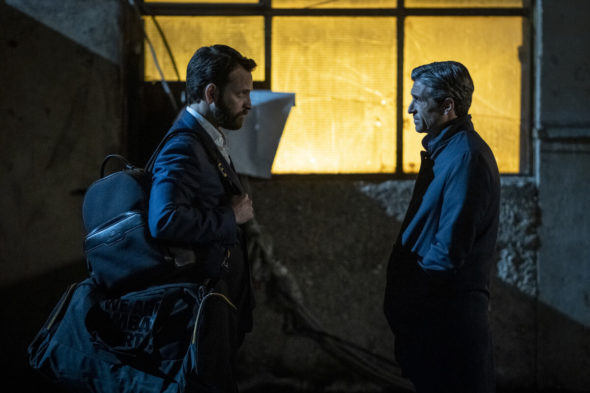 Massimo appears to be on top of the world in the second season of the Devils TV show on The CW. As we all know, the Nielsen ratings typically play a big role in determining whether a TV show like Devils is cancelled or renewed for season three. Unfortunately, most of us do not live in Nielsen households. Because many viewers feel frustrated when their viewing habits and opinions aren’t considered, we invite you to rate all of the second season episodes of Devils here.

An international thriller series airing on The CW in the U.S., the Devils TV show is based on a novel by Guido Maria Brera. It stars Alessandro Borghi, Patrick Dempsey, Malachi Kirby, Paul Chowdhry, Pia Mechler, Li Jun Li, Joel de la Feunte, Lars Mikkelsen, and Clara Rosager. The story follows the appointed CEO of the New York-London Investment Bank, Massimo Ruggeo (Borghi), and Dominic Morgan (Dempsey), one of the most influential figures in the world of international finance. In season two, it’s 2016 — four years since the events that saw Ruggero’s lover Sofia Flores killed and Morgan fired from the New York London Bank. In the time that passed, Massimo has become CEO of NYL, which is now part-owned by the Chinese as part of a Chinamerica initiative. Although he is flying high in his career, Massimo has nothing in his life outside of work and this has created a distance between him and the other “Pirates” – Oliver Harris (Kirby), Kalim Chowdhrey (Chowdhry), and Eleanor Bourg (Mechler).

What do you think? Which season two episodes of the Devils TV series on The CW do you rate as wonderful, terrible, or somewhere between? Do you think that Devils should be cancelled or renewed for a third season?