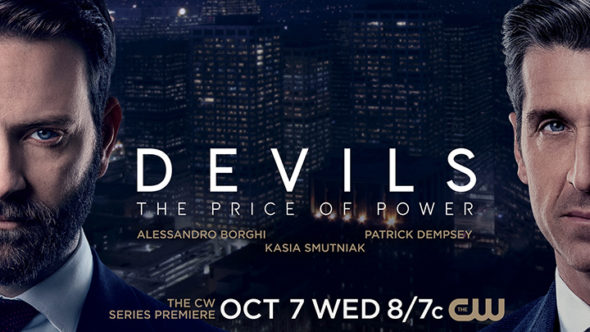 The Devils TV show originates on Sky Atlantic in Italy. The CW pays for the rights to show it in the United States and that’s less expensive than making an original series. Devils has already been renewed for a second season overseas but there’s no guarantee that The CW will air it, especially if very few people watch the first season. Will Devils be cancelled on The CW? Stay tuned. Status Update Below.

An international thriller series, the Devils TV show stars Alessandro Borghi, Patrick Dempsey, Laia Costa, Kasia Smutniak, Lars Mikkelsen, Malachi Kirby, Paul Chowdhry, Pia Mechler, Harry Michell, and Sallie Harmsen. The story takes place in 2011 and follows Massimo Ruggero (Borghi), the charismatic yet ruthless Head of Trading at American New York – London Bank (NYL), one of the world’s most important investment banks. His mentor and father figure is NYL’s CEO, Dominic Morgan (Dempsey). Following a scandal, Dominic appoints another colleague over Massimo as the vice-CEO. Convinced that the scandal was a set-up, Massimo investigates and then finds himself named as the prime suspect in a murder investigation. With the help of his squad and a group of hacktivists, Massimo fights to clear his name and becomes involved in an intercontinental financial war. Facing the “devils” who pull the strings of the world, Massimo will have to choose whether to fight them or to join them.

What do you think? Do you like the Devils TV series? Should it be renewed for a second season on The CW?

Brilliant series, the personal interactions is seamlessly woven,with reasons for actions becoming clear & adding to the strength of the story. Looking forward to series 2,
Hopefully word of mouth will get more people watching it, think the personalities shine through due to the casting & ability of the actors

One of the best show’s I’ve ever seen!!!! I have told Family and friends that they must watch!!! Please, please,please bring it back. It’s a series for intelligent viewers…. Can’t wait to watch reruns and a new season!!!!!

Yes! I really enjoy this show. It took several episodes but it’s great!

The first episode was hard to follow but half way through the 2nd episode it turned pretty suspenseful. I will keep with it for now.

The people who made this owe me an apology. I’m not being self-centered, I’m pretty sure I was the only one on the planet who watched it, but that’s what happens when you lose a bet. Really terrible. Too many scene cuts, very poor directing, and extremely boring.

Really excellent show from Italy. It’s “Suits” without all the smirking and posturing and Mehgan Markle ruining every scene she’s in.
I hope it catches on. It’s worth a look.