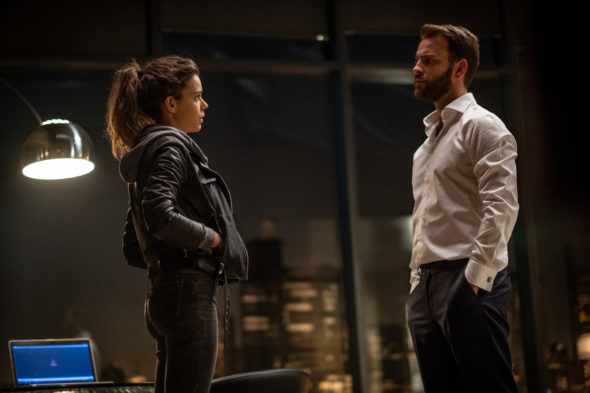 Can Massimo uncover the truth? Has the Devils TV show been cancelled or renewed for a second season on The CW? The television vulture is watching all the latest cancellation and renewal news, so this page is the place to track the status of Devils, season two. Bookmark it, or subscribe for the latest updates. Remember, the television vulture is watching your shows. Are you?

Airing on The CW television network in the U.S., the Devils TV show stars Alessandro Borghi, Patrick Dempsey, Laia Costa, Kasia Smutniak, Lars Mikkelsen, Malachi Kirby, Paul Chowdhry, Pia Mechler, Harry Michell, and Sallie Harmsen. The story takes place in 2011 and follows Massimo Ruggero (Borghi), the charismatic yet ruthless Head of Trading at American New York – London Bank (NYL), one of the world’s most important investment banks. His mentor and father figure is NYL’s CEO, Dominic Morgan (Dempsey). Following a scandal, Dominic appoints another colleague over Massimo as the vice-CEO. Convinced that the scandal was a set-up, Massimo investigates and then finds himself named as the prime suspect in a murder investigation. With the help of his squad and a group of hacktivists, Massimo fights to clear his name and becomes involved in an intercontinental financial war. Facing the “devils” who pull the strings of the world, Massimo will have to choose whether to fight them or to join them.

The first season of Devils averaged a 0.10 rating in the 18-49 demographic and 436,000 viewers. Find out how Devils stacks up against other The CW TV shows.

Will The CW cancel or renew Devils for season two? The show originates on Sky Atlantic in Italy. The CW pays for the rights to show it in the United States and that’s less expensive than making an original series. Devils has already been renewed in Italy so I think there’s a good chance The CW will buy the rights to air season two here. I’ll update this page with breaking developments. Subscribe for free alerts on Devils cancellation or renewal news.

What do you think? Do you hope that The CW will air the second season of the Devils TV show?

My family and friends are all waiting for the second season of Devils to air. We loved it. We would love to see more sophisticated TV on The CW, like this series.

Loved it can’t wait for season 2 if it goes ahead. Was glued to the telly.

Devils was renewed before the first season started. It being an out of country series, & it being far less expensive for us means it probably will come back to the U.S.

Definitely Devils should be renewed for season 2. Just recently became a fan. It is great !