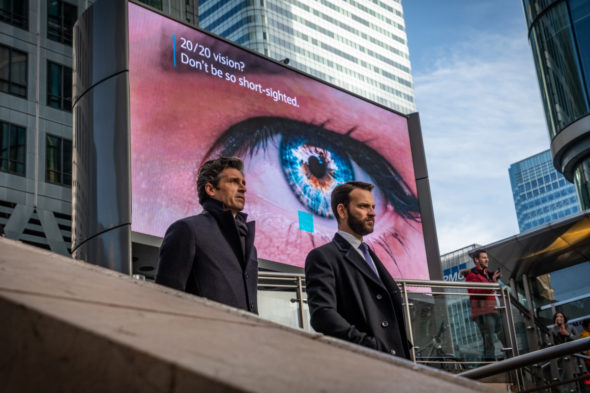 The CW has made a deal with Devils. The Italian series was renewed overseas for a second season in April 2020. Now, The CW has picked up the rights to air season two in the United States and will air the episodes this summer.

An international thriller series, the Devils TV show stars Alessandro Borghi, Patrick Dempsey, Laia Costa, Kasia Smutniak, Lars Mikkelsen, Malachi Kirby, Paul Chowdhry, Pia Mechler, Harry Michell, and Sallie Harmsen. The story takes place in 2011 and follows Massimo Ruggero (Borghi), the charismatic yet ruthless Head of Trading at American New York – London Bank (NYL), one of the world’s most important investment banks. His mentor and father figure is NYL’s CEO, Dominic Morgan (Dempsey). Following a scandal, Dominic appoints another colleague over Massimo as the vice-CEO. Convinced that the scandal was a set-up, Massimo investigates and then finds himself named as the prime suspect in a murder investigation. With the help of his squad and a group of hacktivists, Massimo fights to clear his name and becomes involved in an intercontinental financial war. Facing the “devils” who pull the strings of the world, Massimo will have to choose whether to fight them or to join them.

The second season is expected to have eight installments and will begin airing on Thursday, June 30th.

What do you think? Do you like the Devils TV show? Are you glad to hear that The CW will be airing season two?

The second episode of season 2 saw Massimo profiting by making a huge bet on the British Pound (GBP). In that scene, his Chief Risk Officer observes that Massimo had exceeded his authorized trading limits. Having been a bank trader for the longest time, I find it difficult to believe that any CEO wouldve condoned violating a very basic rule, yet Massimo was able to do so with impunity, and right in front of his Chief Risk Officer for that matter. Any modern day trader would’ve been fired on the spot regardless of whether he made money or not.

I liked the first season. Reminded me of my trading days in banking.

Actually I loved the show.. HAPPY it’s coming back

I was a little disappointed by this show. The title doesn’t make sense, since it really doesn’t have anything to do with me.