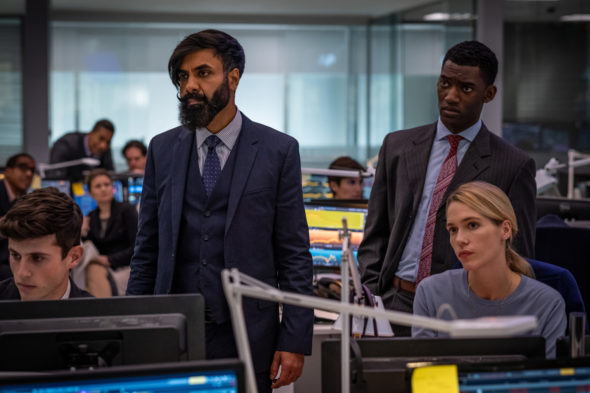 How deep does the corruption run in the first season of the Devils TV show on The CW? As we all know, the Nielsen ratings typically play a big role in determining whether a TV show like Devils is cancelled or renewed for season two (it’s already been renewed in Italy). Unfortunately, most of us do not live in Nielsen households. Because many viewers feel frustrated when their viewing habits and opinions aren’t considered, we invite you to rate all of the first season episodes of Devils here.  *Status Update Below.

An international thriller series on The CW, the Devils TV show stars Alessandro Borghi, Patrick Dempsey, Laia Costa, Kasia Smutniak, Lars Mikkelsen, Malachi Kirby, Paul Chowdhry, Pia Mechler, Harry Michell, and Sallie Harmsen. The story takes place in 2011 and follows Massimo Ruggero (Borghi), the charismatic yet ruthless Head of Trading at American New York – London Bank (NYL), one of the world’s most important investment banks. His mentor and father figure is NYL’s CEO, Dominic Morgan (Dempsey). Following a scandal, Dominic appoints another colleague over Massimo as the vice-CEO. Convinced that the scandal was a set-up, Massimo investigates and then finds himself named as the prime suspect in a murder investigation. With the help of his squad and a group of hacktivists, Massimo fights to clear his name and becomes involved in an intercontinental financial war. Facing the “devils” who pull the strings of the world, Massimo will have to choose whether to fight them or to join them.

What do you think? Which season one episodes of the Devils TV series do you rate as wonderful, terrible, or somewhere between? Do you think that The CW should air the second season of the Devils TV show? Don’t forget to vote, and share your thoughts, below.

I think it’s an amazingly intriguing, intense, and original. We need more shows like Devils and less like star girl, bat woman, so you think you can dance, or the voice, the batchelor, and super man spin offs. The CW is always canceling the few great series they air. Such as swamp thing, trickster, and now possibly devils. I guess devils is to in depth for most viewers/ mind numbing lazy Americans..

A waste of a hour

I was surprised that I truly enjoy the Devil’s first episode and I can’t wait to see the rest of the season. I hope that there be a second season.