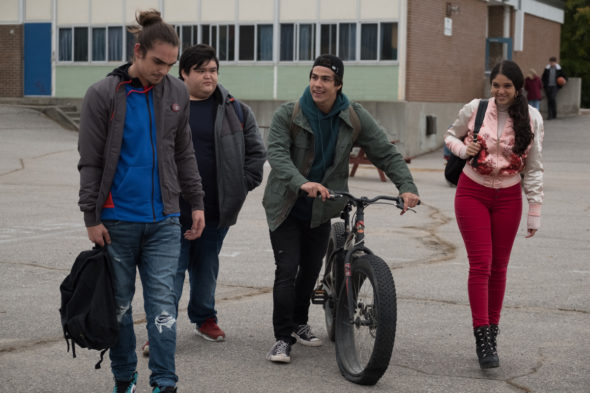 What do you do when you discover supernatural creatures are real? Has the Trickster TV show been cancelled or renewed for a second season on The CW? The television vulture is watching all the latest cancellation and renewal news, so this page is the place to track the status of Trickster, season two. Bookmark it, or subscribe for the latest updates. Remember, the television vulture is watching your shows. Are you?

Airing on CBC in Canada and on The CW in the United States, the Trickster TV show is based on the bestselling trilogy of novels by Eden Robinson. The series stars Joel Oulette, Crystle Lightning, Craig Lauzon, Kalani Queypo, Anna Lambe, Nathan Alexis, Joel Thomas Hynes, Gail Maurice, and Georgina Lightning. Set in Kitimat, British Columbia, the story follows Jared (Oulette), an Indigenous teen who struggles to keep his dysfunctional family above water. Jared holds down an after-school job and cooks ecstasy on the side to support his separated parents. But, when Jared starts seeing strange things, his already chaotic life is turned upside down. At first, Jared thinks he’s losing his mind but, to his relief and terror, the supernatural events surrounding him are all too real.

The first season of Trickster averaged a 0.08 rating in the 18-49 demographic and 389,000 viewers. Find out how Trickster stacks up against other The CW TV shows.

Will The CW cancel or renew Trickster for season two? The series originates in Canada and it was renewed for season two there in May 2020. Though it hasn’t been announced, I think The CW will air the second season episodes. I’ll update this page with breaking developments. Subscribe for free alerts on Trickster cancellation or renewal news.

1/30/21 update: Trickster has been cancelled in Canada so there won’t be a second season.

What do you think? Are you sorry to hear that the Trickster TV show has been cancelled? Would you have watched a second season The CW or CBC?

Great. A decent TV show that gets cancelled not because it isn’t any good, no. But because of Identity politics. The kind that are going to take over and run our lives until we figure out how to “cancel” them. The show had an indigenous theme. How may TV shows in the past 60 years have had that particular theme? Not very many. As if the theme itself is what made the show so fragile. I can flip on a TV and see no end of vulgar sex. Brutal blood and guts. Gun fetish galore. But I can’t watch a… Read more »

I am so upset on this that there wont be a 2nd season of the trickster i have cherokee indian in me its so unfair when its any other race the show goes on but when its about indians or spanish people we always get picked on its not fair. I also enjoy the supernatural parts. I look forward to seeing this show every week it feels like i can get in touch with a piece of me.

I absolutely love the show Trickster. It’s well acted, great plot, great character development, educational and visually beautiful. PLEASE have a second season. I have not seen anything this good on television for years. I also can only get broadcast TV, and I’m sure I’m not the only one that has limited technology that enjoys and looks forward to the show. Please bring back the TV highlight of my week.

I’m really disappoint that you would not choose to continue the trickster series. The diversity showing the native legends of North America Canadian Indians needs to be shown more in prime time. Please consider renewing trickster it really is a good series given time it would get popular with. Thank you for your interest Deana Prestwood