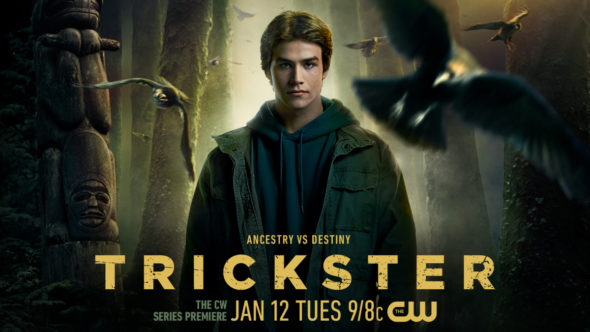 The Trickster TV series originates on the CBC network in Canada and the show has already been renewed for a second season there. The show presumably costs The CW less to license than it would cost to produce an original series. Will season two of Trickster air in the United States? Stay tuned.   *Status Update Below.

A coming-of-age supernatural thriller series, the Trickster TV show is based on the bestselling trilogy of novels by Eden Robinson. The series stars Joel Oulette, Crystle Lightning, Craig Lauzon, Kalani Queypo, Anna Lambe, Nathan Alexis, Joel Thomas Hynes, Gail Maurice, and Georgina Lightning. Set in Kitimat, British Columbia, the story follows Jared (Oulette), an Indigenous teen who struggles to keep his dysfunctional family above water. Jared holds down an after-school job and cooks ecstasy on the side to support his separated parents. But, when Jared starts seeing strange things, his already chaotic life is turned upside down. At first, Jared thinks he’s losing his mind but, to his relief and terror, the supernatural events surrounding him are all too real.

2/17 update: You can see the latest night’s ratings in context.

What do you think? Do you like the Trickster TV series on The CW? Should the network air the second season?

*1/30/21 update: Trickster has been cancelled in Canada so there won’t be a second season.

I am really enjoying this show…sorry to see this will be the only season.

The CBC has decided not to proceed with season 2. There was controversy over the show-runner’s Indigenous heritage. It was challenged and once it was confirmed that she wasn’t quite who she said she was, out of protest, other producers and writers resigned. She stepped down too but the CBC has bailed on the project completely.

I enjoyed the story line in last night’s Trickster stateside premiere.
However, CW’s blatant & repeated censorship/bleeping was so distracting. If CBC can show Trickster unfettered, so can CW.