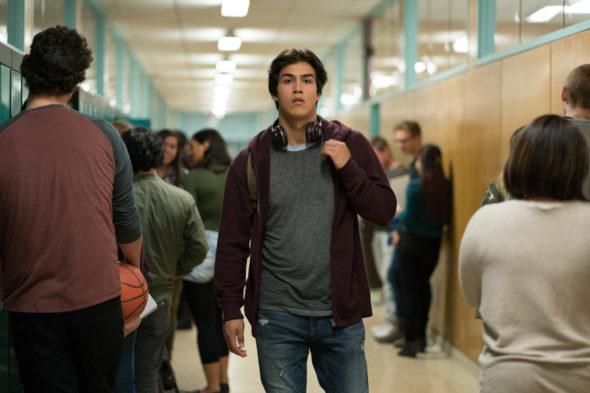 TV show description:
A coming-of-age supernatural thriller series, the Trickster TV show is based on the bestselling trilogy of novels by Eden Robinson.

Set in Kitimat, British Columbia, the story follows Jared (Oulette), an Indigenous teen who struggles to keep his dysfunctional family above water. Jared holds down an after-school job and cooks ecstasy on the side to support his separated parents — partying mom Maggie (Crystle Lightning), who self-medicates an undiagnosed mental illness, and unemployable dad Phil (Lauzon), who has a painkiller addiction and a new girlfriend.

But, when Jared starts seeing strange things like talking ravens, doppelgängers, and skin monsters, his already chaotic life is turned upside down. At first, Jared thinks he’s losing his mind but, to his relief and terror, the supernatural events surrounding him are all too real.

There is more than meets the eye to where Jared grew up, the people he loves, and to Jared himself.

Series Finale:
Episode #6
In a desperate effort to keep her son safe Maggie (Crystle Lightning) and Jared (Joel Oulette) are on the run, but an encounter with Wade (Kalani Queypo) causes Jared to accept that only he can stop his father.
First aired: February 16, 2021.

What do you think? Do you like the Trickster TV show? Do you think it should have been cancelled or renewed for a second season?

Hi: I got question about Trickster tv series. Is it going to be on dvds yet? If not? When.