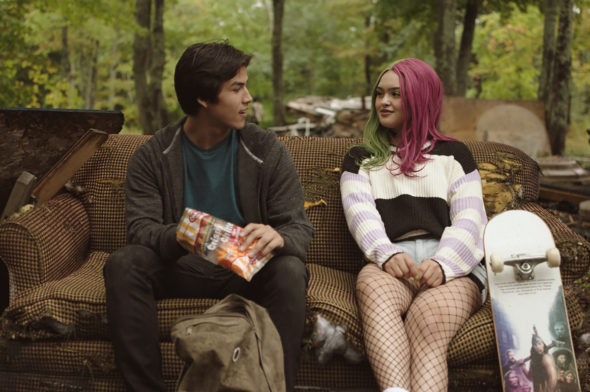 Will Jared get a handle on his life in the first season of the Trickster TV show on The CW? As we all know, the Nielsen ratings typically play a big role in determining whether a TV show like Trickster is cancelled or renewed for season two on The CW (it’s been renewed in Canada). Unfortunately, most of us do not live in Nielsen households. Because many viewers feel frustrated when their viewing habits and opinions aren’t considered, we invite you to rate all of the first season episodes of Trickster here.  *Status Update Below.

A coming-of-age supernatural thriller series that airs on The CW in the United States, the Trickster TV show is based on the bestselling trilogy of novels by Eden Robinson. The series stars Joel Oulette, Crystle Lightning, Craig Lauzon, Kalani Queypo, Anna Lambe, Nathan Alexis, Joel Thomas Hynes, Gail Maurice, and Georgina Lightning. Set in Kitimat, British Columbia, the story follows Jared (Oulette), an Indigenous teen who struggles to keep his dysfunctional family above water. Jared holds down an after-school job and cooks ecstasy on the side to support his separated parents. But, when Jared starts seeing strange things, his already chaotic life is turned upside down. At first, Jared thinks he’s losing his mind but, to his relief and terror, the supernatural events surrounding him are all too real.

What do you think? Which season one episodes of the Trickster TV series do you rate as wonderful, terrible, or somewhere between? Do you think that the second season of Trickster should air on The CW? Don’t forget to vote, and share your thoughts, below.

*1/30/21 update: Trickster has been cancelled in Canada so there won’t be a second season.

I am so very disappointed that Trickster has been canceled after only one season. It’s the first paranormal, supernatural based show I was hoping would go on now that Supernatural the show is gone. I loved the story, just watching the story unfold was very entertaining. I wasn’t aware there were issues with the indigenous people over this show. I wasn’t watching it for accuracy on myth or legend. Was I wrong?

I was sad to hear they canceled it. I really liked it. Theres nothing good to watch on TV since Supernatural, Vampire diaries and originals. At least this was something to watch I love the more spooky supernatural type of shows, and this was different at least . So sick of reality shows and stupid junk now a days , nothing good. I read they canceled it because the author wasn’t full American Indian or something like that, stupid reason .

Dont tell me this show is being cancelled wtf. Its one of my new favorites

So tired of getting interested in shows like this one and then cancelled for whatever reason. I liked all the strange aspects of the show and the actors

I really liked the show Trickster but once again one of the better shows gets cancelled. They keep cancelling all the good shows soon nobody’s gonna wanna watch because they figure why it’s gonna get cancelled.

Thought Trickster was shaping up to be a good series. Really was looking forward to the second series, but as usual , cancelled!

So sad to see a great show get dumped . Loved the scenery so much and the story was so DIFFEREMNT from ANYTHING on TV! Plus! Native Americans were finally getting a shot!

Trickster shd not be cancelled!!!

Incredible series.I heard not renewed due to person making series not of Indian descent. I guess we can wrap up our ending like Wade’s ashes taken on sons journey where he finds a way to merge a stronger Indian culture with father and son being able to merge and Indian place in the world brought back to life.

So sad that such a good show has been canceled for the wrong reasons. Just replace the chick and move on with this great show please.

Hopefully the show is picked up by another network or streaming service. It’s not uncommon at all for shows to replace writers, producers, directors or show runners. But to cancel a show because of the actions of a showrunner instead of simply firing that showrunner is almost unheard of.

Really like this Canadian import. Finally a program with numerous indigenous actors. Hope other people give this program a chance, it’s a good program.