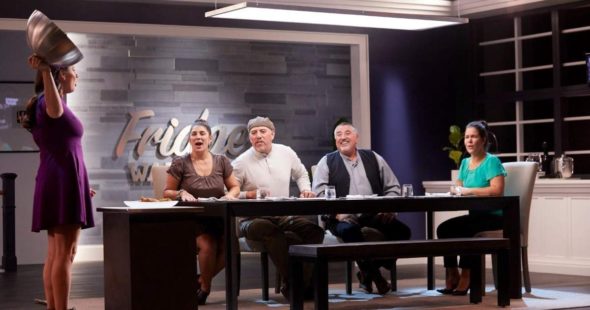 Will there be more episodes on the menu? Has the Fridge Wars TV show been cancelled or renewed for a second season on The CW? The television vulture is watching all the latest cancellation and renewal news, so this page is the place to track the status of Fridge Wars, season two. Bookmark it, or subscribe for the latest updates. Remember, the television vulture is watching your shows. Are you?

Airing on The CW television network in the United States, the Fridge Wars TV show is hosted by Emma Hunter and originates on CBC in Canada. The program pits two top celebrity chefs against one another with a challenge to create extraordinary meals using only the ingredients taken from the refrigerators of regular families. Each episode begins in the first family’s home and a surprise fridge raid, taking everything from last week’s leftover lasagna to condiments and forgotten frozen veggies. With the ingredients in-hand, the competition heats up the studio where two top chefs are given 45 minutes to create a masterpiece — cooking with the ingredients they’ve never seen for people they’ve never met. When time is up, the family takes their place at the dining room table, tasting each prepared meal and scoring them on look, taste, and originality. The cycle happens again with another family and the same chefs. With both families’ scores tabulated, the final scene reveals which chef created the most mouth-watering masterpieces and is named the episode’s Fridge Wars champion.

The first season of Fridge Wars averaged a 0.09 rating in the 18-49 demographic and 341,000 viewers. Find out how Fridge Wars stacks up against other The CW TV shows.

Will The CW cancel or renew Fridge Wars for season two? The show originates on CBC in Canada and is likely inexpensive to produce. I suspect there will be a second season but it’s hard to know if The CW will carry it. I’ll update this page with breaking developments. Subscribe for free alerts on Fridge Wars cancellation or renewal news.

What do you think? Do you hope the Fridge Wars TV show will be renewed for a second season? How would you feel if CBC and The CW cancelled this TV series, instead?