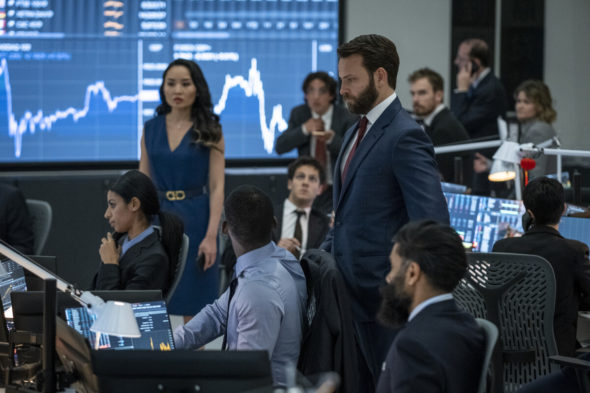 The past few years have been good for Massimo. Has the Devils TV show been cancelled or renewed for a third season on The CW? The television vulture is watching all the latest cancellation and renewal news, so this page is the place to track the status of Devils, season three. Bookmark it, or subscribe for the latest updates. Remember, the television vulture is watching your shows. Are you?

Airing on The CW television network, the Devils TV show is based on a novel by Guido Maria Brera. It stars Alessandro Borghi, Patrick Dempsey, Malachi Kirby, Paul Chowdhry, Pia Mechler, Li Jun Li, Joel de la Feunte, Lars Mikkelsen, and Clara Rosager. The story follows the appointed CEO of the New York-London Investment Bank, Massimo Ruggeo (Borghi), and Dominic Morgan (Dempsey), one of the most influential figures in the world of international finance. In season two, it’s 2016 — four years since the events that saw Ruggero’s lover Sofia Flores killed and Morgan fired from the New York London Bank. In the time that’s passed, Massimo has become CEO of NYL, which is now part-owned by the Chinese as part of a Chinamerica initiative. Although he is flying high in his career, Massimo has nothing in his life outside of work, and this has created a distance between him and the other “Pirates” – Oliver Harris (Kirby), Kalim Chowdhrey (Chowdhry), and Eleanor Bourg (Mechler).

The second season of Devils averages a 0.04 rating in the 18-49 demographic and 204,000 viewers in the live+same day ratings (includes all DVR playback through 3:00 AM). Compared to season one, that’s down by 61% in the demo and down by 53% in viewership. While these numbers don’t include further delayed or streaming viewing, they are a very good indicator of how a show is performing, especially when compared to others on the same channel. Though other economic factors are involved, the higher-rated shows usually get renewed and the lower-rated ones get cancelled. Find out how Devils stacks up against other CW TV shows.

Will The CW cancel or renew Devils for season three? The show is produced internationally, so it doesn’t cost the network as much to air. The decision to cancel or renew Devils likely doesn’t depend on the network’s choice, but if the series is renewed, I think there’s a good chance that The CW will air it. I’ll update this page with breaking developments. Subscribe for free alerts on Devils cancellation or renewal news.

What do you think? Do you hope that the Devils TV show will be renewed for a third season on The CW? How would you feel if this series were cancelled instead?

I would like to see it brought back..
It’s a great…well-made series.