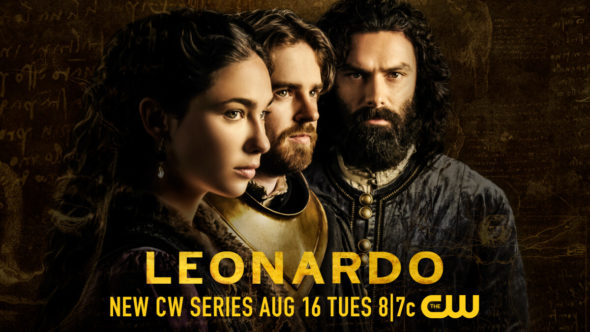 The CW licenses the Leonardo series so it doesn’t cost the network as much to air as its own original dramas. In addition, it’s also already been renewed for a second season internationally. Will The CW air the new episodes of Leonardo, or cancel the series instead? Stay tuned.

A historical drama series, the Leonardo TV show stars Aidan Turner, Matilda de Angelis, Giancarlo Giannini, Freddie Highmore, James D’Arcy, Carlos Cuevas, Alessandro Sperduti, Robin Renucci, Flavio Parenti, Miriam Dalmazio and Antonio de Matteo. The story explores the secrets and drama behind the genius of Leonardo da Vinci (Turner) — his life, his work, and his personal struggles set against the backdrop of Renaissance Italy. In the year 1506, da Vinci is accused of the murder of Caterina da Cremona (De Angelis), his friend and muse. Questioned by Stefano Giraldi (Highmore), an ambitious officer of the Duchy of Milan, Leonardo begins to tell the story of his life. He begins with his first meeting with Caterina in the workshop of his teacher, Andrea del Verrocchio (Giannini). Giraldi, fascinated by the artist’s personality, begins to suspect that Leonardo may be innocent and works to discover the truth.
The ratings are typically the best indication of a show’s chances of staying on the air. The higher the ratings, the better the chances for survival. This chart will be updated as new ratings data becomes available.

What do you think? Do you like the Leonardo TV series on The CW? Should it be cancelled or renewed for a second season?

P Please renewed season 2 so good enjoy it and love it all episodes never missed any episode of it on Tuesday night at 8pm . Look forward to seeing it every week. Please renewed reconsider it in boost your number ratings.

The only quibble I have with this fine, intelligent show (a rarity for the CW), is the casting of Freddie Highmore as Stefano Giraldi, a policeman.
Freddie’s little-boy face (no matter how much hair they glue onto it), and his little-boy voice take me out of every scene he’s in.

Please renewed season 2 so good enjoy it and love it all episodes. Never missed any episodes episodes of it. Look forward to seeing it new series.