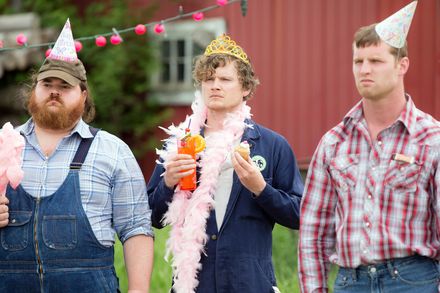 More Letterkenny is coming to the U.S. According to The Hollywood Reporter, Hulu has acquired the streaming rights to four more seasons of the Canadian TV show.

The comedy series “revolves around Wayne (Jared Keeso) and his friends living in the small town of Letterkenny, Ontario, a fictional community based on the actor-writer-executive producer’s hometown of Listowel.”

Seasons three and four of Letterkenny are set to debut on Hulu on December 27th. A premiere date for seasons five and six has yet to be announced.

What do you think? Have you seen Letterkenny? Will you watch the new seasons on Hulu?

Really dumb. But probably relatable if you life in urban small town Canada. Really boring and just stupid if you live elsewhere.

Please we need to see more letterkenny. Pitter patter lets get at er.. Awesome show.. But why youd leave out the proposal that wayne was gonna do in season 6 episode 6. It would be nice to see them get married.

Where is seasons 7, 8 and 9. Need more Letterkenny. Figure it out!