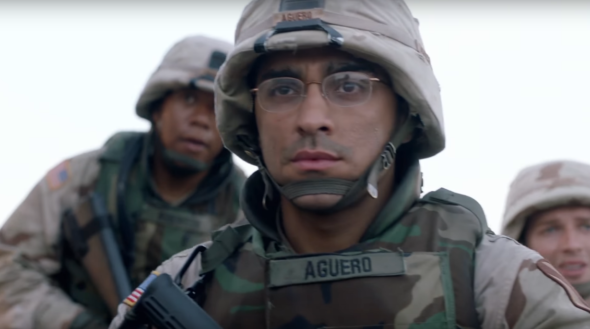 National Geographic is headed to war. This week, the network teased their upcoming TV mini-series The Long Road Home.

Based on the nonfiction book by Martha Raddatz, the drama “tells the story of “Black Sunday,” when a small platoon of soldiers from the 1st Cavalry Division was ferociously ambushed in Sadr City, Baghdad, in April 2004.”

The Long Road Home debuts with a two-hour premiere on National Geographic Channel on November 7th at 9 p.m. ET/PT.

New York, NY – Oct. 9, 2017) – National Geographic’s eight-part global event series The Long Road Home, a gripping and intimate look at the toll war takes on soldiers and their families, will debut with a special two-hour premiere Tuesday, Nov. 7, 2017, at 9/8c. The series moves to its regular date and time of Tuesdays at 10/9c beginning Nov. 14.

Based on the New York Times best-selling book by internationally acclaimed journalist Martha Raddatz, The Long Road Home tells the story of “Black Sunday,” when a small platoon of soldiers from the 1st Cavalry Division was ferociously ambushed in Sadr City, Baghdad, in April 2004. Eight Americans would make the ultimate sacrifice that day and more than 65 would be seriously wounded.

No soldier fights alone. The soldiers in this story are no exception. The scripted series offers viewers an intimate window into the experience of war as seen through the eyes and the hearts of the soldiers themselves and their families back home. It is an adrenaline-fueled and emotional journey that follows the action of the battle on two simultaneous fronts – the chaotic, terror-filled streets of Sadr City, where a group of inexperienced young soldiers faces an unexpected and unimaginable attack with bravery they never knew they had, and the homefront at Fort Hood, where family members, desperate for news of their loved ones and fearing the worst, discover their own courage and determination as well.

With unprecedented intimacy, the eight-part series tells the stories not only of these courageous soldiers but also of their compatriots involved in the three desperate and deadly rescue missions launched to save them. Across eight hours, reflecting the exact amount of time the soldiers were pinned down, each episode highlights a different character’s unique and compelling journey as we come to understand their heroism and humanity.

“BLACK SUNDAY” SPECIAL TWO-HOUR PREMIERE Tuesday, Nov. 7, at 9/8c The soldiers of the 1st Cavalry Division from Fort Hood, Texas, say goodbye to their loved ones as they depart for Sadr City, Baghdad, on a peacekeeping mission. The area, without incident for a year, is known as the “safest place in Iraq.” It’s Task Force Lancer’s fourth day in country, when the troops under Lt. Shane Aguero are ambushed during a routine sanitation support mission. The first shots sound like popcorn, and within minutes bullets pound the vehicles in a relentless hailstorm. With two vehicles down, Aguero’s Platoon has no hope of getting back to base. Braving an intensifying rain of bullets from rooftops, the men head down a long, narrow and nameless alley, where they find refuge in a house – with a terrified Iraqi family inside. Back at Camp War Eagle, Lt. Col. Gary Volesky and Capt. Troy Denomy launch the first of three rescue missions to retake the city and free their men before it’s too late. On the homefront, the soldiers’ wives and families continue on with daily life, willing themselves to maintain normalcy during their loved ones’ deployment and unaware of the mounting situation in Iraq.

“INTO THE UNKNOWN” Tuesday, Nov. 14, at 10/9c Denomy leads the first rescue into Sadr City under heavy fire, facing an overwhelming Iraqi militia. It’s clear insurgents have been preparing for this ambush for weeks. Volesky launches the second rescue convoy. Both rescue convoys take heavy casualties, while Aguero and his men struggle to hold their position in the Iraqi house. Meanwhile, back on the homefront in Fort Hood, Texas, Gina Denomy faces challenges of her own as she adjusts to being a new care team leader in the Fort Hood Family Readiness Group and the mother of a newborn son.

“IN THE VALLEY OF DEATH” Tuesday, Nov. 21, at 10/9c Before Staff Sgt. Robert Miltenberger’s deployment, he is overcome by a strong premonition that he will die in Iraq. He’s so certain, that’s he’s already said his goodbyes to his wife and family. Now in the thick of battle, the premonition returns, causing Miltenberger to abort his troop’s advance in the rear of one of the rescue convoys, narrowly saving his men. But Miltenberger’s vehicle – an open LMTV truck – has been hit, and as night falls, he and his men get stranded in the city under increasingly dangerous conditions. Elsewhere in the city, Denomy evacuates his wounded and regroups with Volesky for another rescue attempt, while Aguero and his men brace for contact. News of the ambush reaches stateside, and LeAnn Volesky and Gina Denomy try to reassure worried families as tension and fear mounts.

“THE CHOICE” Tuesday, Nov. 28, at 10/9c Originally a bitter opponent of the U.S. occupation, interpreter Jassim al-Lani was once strongly drawn to the militia behind the ambush, but left it following the murder of a close friend. A devout Muslim, the quiet al-Lani is not trusted by all the soldiers, especially Sgt. Bourquin. Tensions rise in the house of refuge as the insurgents change tactics and force Aguero to make a decision that will scar his platoon forever. Back at Fort Hood, LeAnn and Gina learn about the casualties overseas and do their best to prepare themselves and calm the families that rely on them for support.

“A CITY CALLED HEAVEN” Tuesday, Dec. 5, at 10/9c Pfc. Tomas Young believes strongly in the ideals of justice, but he also believes in war and retribution. He quickly learns about the realities of war when Miltenberger’s troop comes under a blaze of bullets. Casualties mount in the rear of their LMTV truck as Denomy tries yet again to rescue the stranded platoon. Still on the roof of the Iraqi house, Aguero’s men reckon with the destruction they were forced to cause. For Young, this exact moment on April 4, 2004, marks the beginning of a lifelong struggle and a mission of peace, through which he’ll touch countless lives.

“ABANDON HOPE” Tuesday, Dec. 12, at 10/9c Sgt. Eric Bourquin’s tough facade hides a heartbreaking past, which led him to drop out of high school at 17 years old to join the Army. Now 23, Bourquin finds himself stuck in the mazelike suburb of Baghdad – Sadr City. The ammunition supply is quickly diminishing for the troops in the Iraqi house. Bourquin is struggling to signal helicopters in a desperate last-ditch effort to get located, leading to a final battle. At Fort Hood, the families are engaged in their own challenges as more news trickles in from Sadr City.

“ALWAYS DREAM OF ME” Tuesday, Dec. 19, at 10/9c The climactic final chapter of the eight-part global event series, The Long Road Home. On the eve of the battle, Spc. Israel Garza has a dream of returning home to his wife, Lupita, and their two kids. Rescuers finally punch through to the stranded platoon, but the battle hasn’t finished taking its toll – both in Sadr City and Fort Hood. As the hours grow darker and the causalities mount, the now-wounded Garza holds on to a dream he had the previous night, determined to get back home. Eight hours after the first shots were fired, the men of the 1st Cavalry Division are reunited and must cope with the new realities of the war that has just begun. The soldiers and families honor their fallen.

What do you think? Have you read The Long Road Home? Will you watch the Nat Geo mini-series?

I will accompany the miniseries “The Long Road Home” to confirm the participation of Thomas McDonell although small. After all, in what episodes does he participate? I do not understand why he is not quoted as part of the cast.