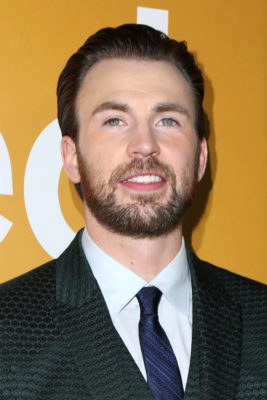 Chris Evans is lending his voice to National Geographic. This week, the network announced the Captain America star will narrate the upcoming TV series Chain of Command.

The eight-part docuseries “features incredible access from inside the walls of the Pentagon to the front lines of the U.S. military’s mission to fight global extremism around the globe.”

(Washington, D.C. – Nov. 29, 2017) National Geographic today announced that Chris Evans (“Captain America,” “The Avengers”) will lend his voice to the groundbreaking new eight-part documentary series Chain of Command. Filmed over 18 months, the series features incredible access from inside the walls of the Pentagon to the front lines of the U.S. military’s mission to fight global extremism around the globe. The global event series, from National Geographic Studios and showrunner Scott Boggins, of the critically acclaimed hit series “The Circus: Inside the Greatest Political Show on Earth,” will premiere on Monday, Jan. 15, at 9/8c, and will air globally in 171 countries and in 45 languages in early 2018.

“We couldn’t think of a more natural fit to narrate our series about America’s real military heroes than Chris Evans, one of America’s favorite big-screen action heroes,” said Tim Pastore, president of original programming and production. “Chain of Command is the quintessential National Geographic nonfiction series, which uses the power and the trust of the yellow border to gain incredible inside access to places most organizations not only can’t go – but won’t go. We’re thankful not only to the Pentagon for granting us that access, but also to the soldiers and their families from the top down who trusted us to bring their stories to our audiences.”

“I’m proud to be a part of any project that shines a spotlight on the incredible work our armed forces do every day around the world,” said Evans, who has served as a spokesperson for Got Your Six. “I think this series is an important opportunity for all of us to understand and appreciate the people who put their lives on the front line every day to keep us all safe.”

Chain of Command delivers extraordinary insight into a line of authority and responsibility as never seen before, including a rare on-camera sit-down with Gen. Joseph Dunford Jr., the 19th chairman of the Joint Chiefs of Staff. From the halls of power at the Pentagon in Washington, D.C., to the front lines in Mosul, Iraq; Afghanistan; Somalia; Niger; and South America, and to the surprising ISIS recruiting ground of Trinidad and Tobago – only 1,600 miles from the coast of Florida – viewers will see firsthand how decisions made at the Pentagon have a direct impact on our service members on the ground, fighting to protect Americans and our allies from radicalized extremists.

This fall, National Geographic premiered the critically acclaimed scripted series The Long Road Home, based on the New York Times best-selling book by internationally acclaimed journalist Martha Raddatz that tells the true story of “Black Sunday,” when a small platoon of Army soldiers was ferociously ambushed in Sadr City, Baghdad, in April 2004. The series has been praised by critics, veterans and the Army for its accurate and moving depiction of our armed forces and their families. Chain of Command continues the network’s commitment to sharing these important stories across our vast global footprint.

Chris Evans, a native Bostonian, began acting at the age of 11, and later attended the Lee Strasberg Theater Institute in New York. He soon turned his attention from the stage to the screen, and has appeared in a number of memorable films, including “Scott Pilgrim vs. The World,” “Snowpiercer” and “Gifted.” Since 2011 he has been best known to audiences as the titular star of the Captain America franchise, a role he’s reprised eight times in other Marvel films, including “The Avengers.”

What do you think? Do you watch National Geographic? Will you watch Chain of Command?

So, because he has played a hero in the movies he was the perfect choice to narrate this series???? How about finding a real veteran who has actually faced hostile bullets and served in the military to be the narrator. R. Lee Ermery comes to mind first off but I’m sure that if you tried you could find a younger veteran with the voice and the real world knowledge to do a good job with a heck of a lot more credibility. I’ll watch, at least the first episode but with some skepticism and a lot of disappointment that you… Read more »