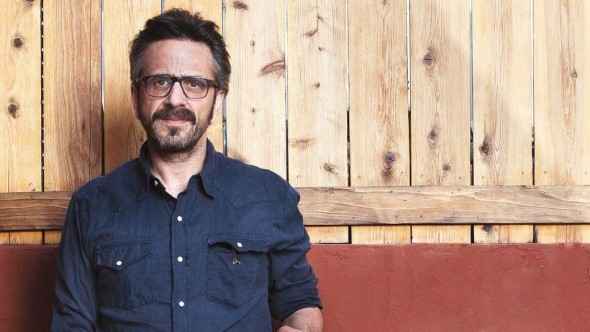 IFC has renewed their Marc Maron comedy series, Maron, for a fourth season. Production will begin in January on the 13 episodes for a spring premiere.

Production Begins in January 2016 for a Spring Premiere

NEW YORK, NY, November 6, 2015 – He’s the amiably gruff uncle you love to hang out with, fueled by nervous energy and usually leading you far astray towards improbable chaos. IFC today announced it has renewed its critically acclaimed original comedy Maron for a fourth season, starring actor, comedian, writer and podcaster Marc Maron as a fictionalized version of himself. Guiding viewers through a semi-autobiographical funhouse, the flotsam of broken relationships and the bright seductive light of comic success, Maron is produced by Fox 21 Television Studios. Production on 13 half-hour episodes begins January for a spring debut.

“I got the character of me into a bit of trouble last season. I hope I can get him back on track. The real me is doing fine,” said Marc Maron.

“Marc is easily one of the most audacious comedians around today, and his pervasive sense of angst and unease is something we can all relate to and can’t stop watching,” said Jennifer Caserta, IFC’s president. “His take on society, and himself, is completely unfiltered and authentic and manifests into great comedic storytelling. We’re thrilled to renew Maron for a fourth season and look forward to more comic mayhem.”

After falling off the wagon in last season’s finale, in season four Marc struggles to regain his sobriety. Along the way, he attempts to find a deeper meaning to his life. In season four, Marc will once again be joined by a line-up of recurring and guest stars. The previous season featured Judd Hirsch (Ordinary People, Damages, This Must Be the Place) as Marc’s unstable father; Sally Kellerman (MASH, Back to School, Workaholics) as his meddling mother; Troy Ruptash (Firsts, Prison Break) as his fragile brother; Andy Kindler (Bob’s Burgers, Everybody Loves Raymond) as his voice of reason; and Dave Anthony (The Dollop podcast) as his devil’s advocate and trusty punching bag assistant, Kyle. Guest stars included Maria Bamford (Arrested Development, The Comedians of Comedy), Bruce Bruce(Bruce Bruce: Losin’ It, Top Five), Whitney Cummings(2 Broke Girls, Whitney), Andy Dick (The B-List), Dr. Drew Pinsky(Dr. Drew On Call, Loveline), Adam Goldberg(Fargo),Elliot Gould (Ray Donovan, Ocean’s Eleven), Patton Oswalt(The Goldbergs, Agents of S.H.I.E.L.D.), and MaryLynn Rajskub (24: Live Another Day, 2 Broke Girls), among others.

Season four of Maron comes on the heels of one of Marc Maron’s biggest years yet. He continues to be one of the most popular stand-up comedians and podcasters today and this summer even landed a much buzzed-about interview with President Barack Obama. He also toured the U.S., Australia, the U.K. and Ireland performing his unique brand of stand-up to thousands of comedy fans and recorded a live special, which will be broadcast in December (check local listings for details).

Viewers can catch up on the first three seasons of Maron on iTunes; seasons one and two are also available on Netflix. Season three will be available on December 28.

Since its founding in 1994 by Denis Leary and Jim Serpico, Apostle, a TV and Film Production company, has produced an unprecedented amount of ground-breaking material. Projects such as Rescue Me, Sirens and Blow have defined Apostle’s tone and darkly funny edge. The production shingle’s repertoire continues to include a wide variety of projects including scripted and non-scripted; animated and live action; drama and comedy.

What do you think? Are you a fan of the Maron TV show? Do you plan to watch season four?

FINALLY! One of the best American comedies currently on the air. Well done.