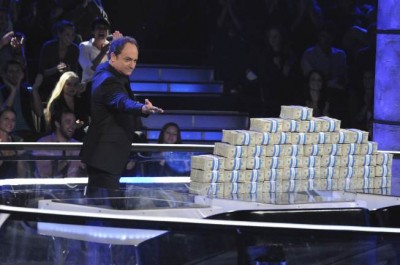 At the start of each game, host Kevin Pollack gives a pair of contestants a million dollars in cash. It’s theirs to keep as long as they can answer a series of trivia questions correctly. The trick is for them to put their cash on the right answer. Whatever money’s put on an incorrect answer in any given round, will drop away and is gone for good.

The series kicked off on December 20th with a 1.9 rating in the 18-49 demographic and 5.31 million viewers. The episode that followed did just a little better — not a bad performance for a holiday week.

The show was immediately hit with controversy as it turned out that one team of contestants, Gabe Okoye and Brittany Mayti, chose the correct answer but were told that it was incorrect and lost $800,000. As Pollack pointed out later, because they got the final answer wrong (in which they had to bet all of their money on one of two answers), it didn’t change the outcome of the game. FOX bent to public outrage though and offered to give the couple another chance on a future episode.

There’s a belief in Hollywood that any publicity is good publicity. Unfortunately, headlines from the controversy didn’t bring any additional viewers to the show. By the time the season ended Million Dollar Money Drop only averaged a 1.7 in the demo and 5.19 million viewers.

There was talk about possibly bringing back the show for a second season over the summer but FOX has instead cancelled the series. At last word, Okoye and Mayti were undecided about whether or not they would return to try again. Since the first season had already been shot by the time the controversy erupted, it seems the show’s cancellation knocks out any chances of a rematch — at least in the United States.

Though it won’t continue here in the States, there are more that 15 international versions of the show. Casting is currently underway for the latest version which will be produced for Singapore.

What do you think? Are you sorry there won’t be a second season? Will you miss the TV series?

I loved the show…wish it would be brought back….nail-biting recreation!

I’ve already submitted a reply in a post listed on the GSN.com forums, and I think you will agree that this message would to an extent mirror the reply. First, let us discuss the format of the game. It had great potential, and could’ve gotten addictive easily. So what went wrong? The execution. To see what I mean, just watch an episode from the Premiere week in December of 2010. The contestants who competed on those episodes had Egos the size of the sun and brains the size of a green pea. Also, did it really have to take ten… Read more »

Don’t be surprised if the show gets picked up. It was one of the best game shows on TV.

That’s too bad. This was a terrific game show that actually required knowledge and was also fun to play along with at home. Fox should have kept it at least in waiting to quickly fill in for something that’s sure to be canceled after two episodes in the fall.

cool show, Pollak was awesome. To the writer that wrote this…. it’s Pollak, not Pollack, nice job on the research there. 🙂

Shame on you FOX for canceling Million Dollar Money Drop. It was edge of your seat suspense, very entertaining. I had hoped for a 2nd season this summer.

I never like Money Drop. So, good riddance to bad rubbish.

NOOOOOOOOO!!!!! HOW COULD THIS BE? MILLION DOLLAR MONEY DROP WAS DA BOMB, IT WAS THE ONE OF A KIND GAME SHOW THAT PUT YOU ON THE EDGE OF YOUR SEAT ENTERTAINMENT EVERY SINGLE TIME YOU WATCHED IT!!!!! FOX, SHAME ON YOU FOR NOT GIVING THIS FUN PROGRAM AND THE COMEDIC GENIUS OF KEVIN POLLACK ANOTHER CHANCE W/ A SEASON TWO OVER THE SUMMER, I’M MAD & SAD AS HELL!!!!! :’-C

I am disappointed as the ratings were not that bad! Oh well! It seems like networks don’t give game shows a chance anymore!

As much as I don’t care about this show(I actually like Minute to Win It more – not that I care too much about that show either), they should give that couple another chance at the kind of prize they lost, or just give ’em the $80k since we know it was a fluke anyway!

The first two episodes were enough for me.

It was the best game show in prime time. And now let’s just ax it. We’re fox. But of course it’s my own fault for watching.