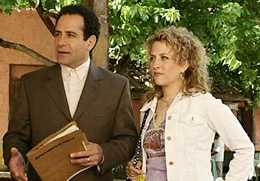 Now, why did Monk NOT open the gift from Trudy? I recall them saying something over dinner but for the life of me, I just don’t know why he didn’t open the present from her as soon as she passed. I know they said it was “romantic”. I just can’t remember what his reasons were. To me, this is crucial.

Monk! The character is burnt into our memories forever. So powerful that it evokes a range of emotions yet so fragile that you are scared to loose it. But the time has finally come. Monk has to face this deepest fear of finding why his true love was taken away from her. Will he find peace after solving the greatest mystery of his life is yet to be answered? Probably not. His love for Trudy transcends this world and the other. The only way he would ever be happy is when holding his beloved Truly in his arms. Is she… Read more »

Wow…I don’t want the show to end. I have been interested in this show since my older sister made me watch it one day. I never really liked Sharona that much, but Nataile is perfect for the show. When she was crying in the last episode, my heart was crushed and I started crying. I don’t want the show to end, because it’s been so good. In the end I do want Adrian to stay alive, but I think he would be happier in heaven with his wife Trudy. I guess i will just have to wait for the last… Read more »

The unknown poison will somehow cure Monk of all his phobias. He will be OK on his own when everyone else goes their own way. Monk moves back with his brother and they start their own consulting business. Gotta love the Monk brothers!

WOW! That is all I can say. And (for one last Monk-ish “Here’s what Happened”): Monk notes to Trudy that they haven’t been caroling since college. He thanks her for getting him out of the house and she asks about a missing woman, Wendy Stroud. Monk is heading down to the clinic where she worked to talk to her boss. He notices that something is wrong with Trudy and she says she has a lot to do and not enough time. Monk notices a present under the tree and Trudy asks him not to open it until Christmas because it’s… Read more »

Stottlemeyer has TK, Randy is hinting that he is moving, probably to be in New York with Sharona, Natalie has her new Naval Dr., Julie is going off to Berkley – that leaves Adrian to be with Trudy, and that will be in his death. Sad way to end, but we all have to die sometime, and Adrian will then be finally at rest.

I think Mr. Monk will die not saving anyone, but solving Trudy’s murder case. And yes I also think the only way he will be releaved from his pain is to be with Trudy.

YES!! I completely gave up on the series just because she left, hopefully she’s back for more than one episode!

I just watched Monk and I am hoping this isn’t the last show of the series. I liked Sharona but I really like Natalie. I think as a long time and loyal fan of Monk that the only way to end the show is to have Monk find the killer of Trudy and return to the police force. That in my opinion the ONLY way to end this wonderful show. Tony Shalhoub is Monk and has defined that character for 8 yrs let him have his own closure and find the killer of his beloved wife Trudy. It’s the right… Read more »

I have certainly enjoyed the Monk series. I will miss my favorite male OCD character…I am also an OCD character, and I have much sympathy for the emotional pain, and struggle to be “Normal”!!! I wish the best for all the people on his show in their continued future sucesses!! Paula

Reader
so hard to say goodbye

I am really sad that they are cancelling the show. Most TV is trash. This is the only show I watch other than children’s shows with my kids. Very little profanity. Murder mystery without a lot of gore like CSI and Law and Order and others. Very funny. Overall it is a very clean show- a rare find. I have no idea what to watch now for adult entertainment 🙁

I truly think that Monk has done just about everything including last week’s Mr. Monk and the Voodoo Curse episode! I am one of the biggest fans of Monk…the biggest I know. I have watched every single episode of Monk except for tonight’s episode where Monk tries out group therapy for a change and then all the group members start getting killed off! I will watch it tonight though at 12:00 P.M. when I get home!!! Monk will live in my heart forever and thak you Tony Shaloub for taking the role of Adrian Monk, may Monk avenge his wife…

Is there a chance for reconciliation to continue this favorite of all TV shows of mine? It is one of the only three or four shows that I look forward to watching each week, and I will watch it even if it conflicts with one of the others (ie, Medium now is on at the same time, so I gave up watching it). Therefore, your network has an advantage over others & could use this information to ask for more money from the sponsors. Tony Shalhoub is such a delight in his performance of Adrian Monk, as well as the… Read more »

Gonna miss him, however, if they think it’s time, I have to go with that decision. I already own all his seasons. In fact, my kids give them to me for presents. I “Monk” every Friday with my best friend Evie, who lives in GA. and I am here in NJ.