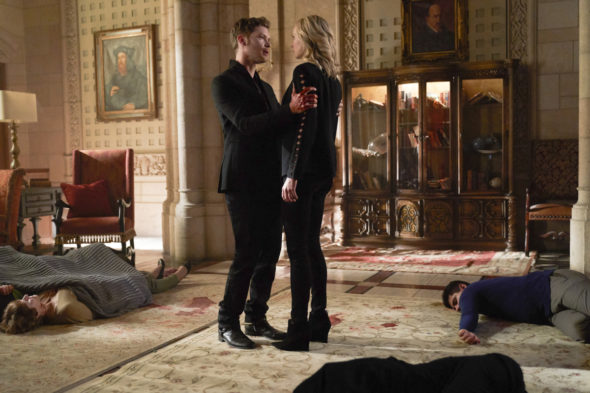 Is the fifth and final season of The Originals TV show on The CW a good send off for this long-running series? As we know, the Nielsen ratings would typically play a big role in determining whether a TV show like The Originals was to be cancelled or renewed for season six. Although it is technically not “cancelled,” many viewers are frustrated their viewing habits and opinions weren’t considered, before the decision was made to end The Originals with season five. We care what you think, so we invite you to rate all of The Originals season five episodes for us here.

What do you think? Which season five episodes of The Originals TV series do you rate as wonderful, terrible, or somewhere between? Should The CW have cancelled or renewed The Originals for a sixth season? Don’t forget to vote, and share your thoughts, below.

So sad that they cancel this on Spectrum but I did get to watch season 5 on Netflix and it’s so sad. That the two brothers kill themself they each stab themselves Elijah kills Nicklaus and Nick Klaus kills Elijah. And Haley gets killed by some woman that rips her heart out. Hope dies and sees her mother Haley on the other side but then comes back because of Nicklaus saves her by giving her CPR. What upset me the most Was Elijah. Haley pinned up against the wall being choked by this woman and he looks directly at her… Read more »

The worst written season ever.. S1 was great. S2 was great but had some very minor points that were poorly concieved and written. S3 was full of things that didn’t make sense – at all. e.g- there is a prophecy that the family will fall, and the family who are known to be totally ruthless when it comes to ..well everything..decide they will leave enemies alive to come back later rather than killing them..For instance when Hayley is being attacked by the Strix, and they all get knocked out by a spell. Hayley and Cami just run – rather than… Read more »

Why do all the networks want to get rid of ALL THE GOOD shows.. and keep all the DRAMA filled shows that are stupid and irrelevant.. Bring back the good stuff all the Sci-Fi, and Action shows like the Originals, Zoo, etc… why flood our television with retarded reality TV show drama.. That’s what wrong with majority of our society today.. people don’t know how to use their or get in touch with their imagination and get lost in a good story.. but they get all wrap up and into the reality TV show drama filled BS!!.. I tell my… Read more »

The Originals has so much new potential with Hope, the Mystic Falls school, Marcel & ‘human’ Rebecca making a family, Freya, 2 witches & a warewolf choosing to have a baby—- New Orleans or not- we have grown to love these characters…. the age group has changed- We’ve grown up with them. I’m 50 and watch with my teenage daughter.. so much to talk about! How do you deal with ‘different-ness? Why do people have their bigot-ness? How do we change? Along with the fun of it NOT being real. It opens conversations that may otherwise be ignored. Please start… Read more »

Completely agree- give me a good sci-fi story anytime!

I agree.. all the good shows they want to get rid of and keep all the drama filled shows that are stupid and irrelevant.. Bring back the good stuff (Sci-Fi, Action) like the Originals, Zoo, etc… why flood our television with retarded reality TV show drama..

The worst season ever! I love the Originals! The first four seasons were amazing, however, this last season is by far poorly written and executed. It is really hard to watch the Mikelson family end like this. I find it hard to watch. Unfortunately I can’t watch the rest of Season five because it totally a dud.

Since we are going back to Mystic Falls for Legacies, does that mean that we will see Bonnie, Elena, and Damon? The way Vampire Diaries ended was a little strange, and my thoughts are that seeing Damon and Elena meet up with Stefan was years into the future since they show Elena as a doctor, but it didn’t look like her and Damon aged. I’m confused on that.

My only hope is that Legacies will feature guest appearances by the Originals cast Elijah, Klaus, Marcel, Rebecca, Davina, Cole, and Freya. My heart is broken that this show has been canceled. This show was better than the Vampire Diaries to me, and I really wish they would have done at least one or two more seasons. I wish they would reconsider, and I pray they are not planning on killing all of the Originals off in the finale. That would make me not even want to watch the new show. Wrong move to cancel this show!

I like the rest of the posts on here simply can not understand how a series as good as The Originals can be canceled. My question is who makes this decision? Certainly not the viewers I started watching the CW a number of years ago when most of the shows were great shows with good storylines and wonderful actors. My opinion of The CW has certainaly changed and not for the better. Every time I find a show with a solid foundation flawed chactertors (because quite frankly I’m a little tired of superheros that i was raised with in comic… Read more »

The Originals is the best show on CW.. i will not be watching that network when it ends.. they always cancel the best shows. Finally a show that captured the adult audience, tired of all the little teenage stuff put out there.
I hope anothwr network picks it up or netflix..
#lovetheoriginals

The Originals is one of the greatest series I know, built on the world that the Vampire Diaries created. With multiple and complexe caracters, excitings story-telling and compelling twists, the serie has shown New Orleans from a new perspective. Great actors and breathtaking performances made this serie to be on of my favorite. Exciting and compelling story-telling with glorious flash-backs featuring superbe costums create more and more new lawyers and levels to the story. I fail to understand why the amount of episodes in the 4th and 5th season were reduced from 22 to 13. And I do not understand… Read more »

Judy Cleveland the only one to be opposite Wayam'

The Originals is exceptional as it’s creation ,stars,and New Orleans setting is exciting, enticing and the spin on horror and love is compelling. You are pulled into the Mystic and exciting New Orleans drama of the Mikaelson family legacy and it’s struggle to purservere in the present day . Bringing the past explanations of family history to give background to the present chaos they must sacrifice self for the family to continue it’s legacy . Bringing family ,friends, and foes in to their trials to keep the order and rule in New Orleans as the Matriarch Family . I would… Read more »