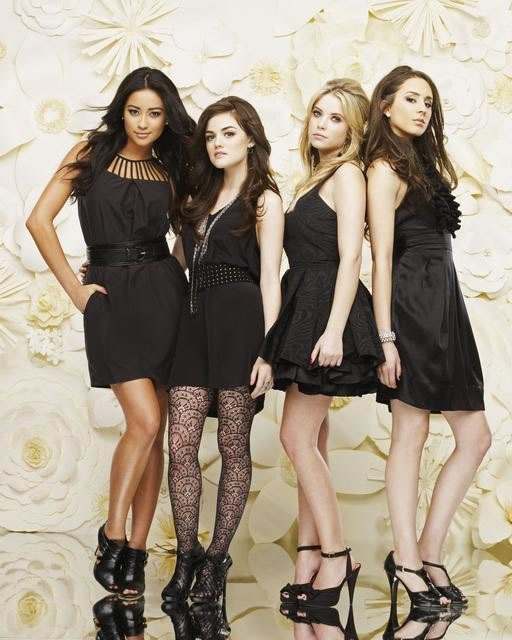 TV show description:
This TV show is based on a series of novels of the same name that were written by Sara Shepard. The drama focuses on four girls who watch their clique fall apart after their leader, Alison DiLaurentis (Sasha Pieterse), disappears during a slumber party. A year later, her body turns up in the backyard of her old home, bringing the other girls together again. They start getting messages by someone using just the letter “A” as a name and threatening to expose long hidden secrets that only their former leader knew.

After a year of living abroad with her parents and younger brother, Aria Montgomery (Lucy Hale) moves back to town. She meets a man she instantly connects with, Ezra Fritz (Ian Harding), and they begin a love affair. The next day, as she rejoins her old school, she learns that her lover is her English teacher. She gets a message from “A” about having an affair with her teacher. She tries to transfer out of Ezra’s class, but the two end up getting back together.

Aria’s parents, Byron (Chad Lowe) and Ella (Holly Marie Combs), also have a son named Mike (Cody Christian) and a troubled marriage. Ella still doesn’t know about the affair Byron had before their move to Europe. The woman he had the affair with, Meredith (Amanda Schull), has now befriended his wife.

Hanna Marin (Ashley Benson) became the group’s leader after Alison disappeared, and then, in order to gain popularity, distanced herself from the others in the clique. She had been heavy when she was younger and lost weight to fit in. Alison used to remind her to watch her food intake and it made their relationship strained.

At the mall, Hanna and another girl, Mona Vanderwaal (Janel Parrish), steal a pair of sunglasses and seem to get away with it — until the police come to Hanna’s door. Her mother Ashley (Laura Leighton) tells her that she’ll sort it out and then beds the cop. The officer then interrogates Hanna more than the others girls about Alison’s disappearance. Sean (Chuck Hittinger), Hanna’s boyfriend, stops having sex with her so she gets revenge by crashing his car.

The smart one in the group is Spencer Hastings (Troian Bellisario). She has to give up the loft she created when her sister Melissa (Torrey DeVitto) and her boyfriend, Wren (Julian Morris), move in while waiting for the renovation of their home to be finished. It causes conflict between the siblings and Spencer is also attracted to Wren. She gets warned by “A” not to kiss, or she will tell. She does it anyway, and her sister catches her, forcing Wren to move out. Spencer steals one of her sister’s old school papers, submits it under her own name, and then gets nominated for a national award for it. On the night that Alison disappeared, Spencer woke before the other girls and went looking for her missing friend alone.

Emily Fields (Shay Mitchell) is a competitive swimmer. Some new neighbors have moved into Alison’s old house, including Maya St. Germain (Bianca Lawson). She asks Emily for some help unpacking, and the two end up smoking some weed and sharing a kiss. “A” sends a message to Emily revealing that she’s curious about her sexuality and indicates Alison and she had kissed once as well. Emily’s boyfriend gets very possessive of her and tries to force her to have sex with him, causing Emily to end their relationship. After Emily and Maya kiss again, this time in a photo booth, someone steals the picture and prints off hundreds of copies.

Series Finale:
Episode #160 — ‘Til Death Do Us Part
The ultimate endgame comes to light while secrets and the identity of A.D. are revealed.
First aired: June 27, 2017.

What do you think? Do you like the Pretty Little Liars TV show? Do you think it should have ended with season seven? Would you have watched an eighth season?

All great shows must end… I guess. Hard to figure out what I’m ah gonna do with my ladies gone forever. What’s an old man to do when several of the loves of his life are whisked away forever? I shake my head in disbelief & sadness. Good bye fair ladies. I will truly miss u all… so!!! Hear my heart breaking?

Why? I like it very much. Please don’t cancelled we want you back

I love PLL, this show should not end after season 7, I would watch this show now matter what season it was. This is a great show.

Seriously? One of the best shows in a long time and you are ending it? SMH. Ridiculous.

Who was A. I missed some..when will it start up again. I enjoy the suspense. It’s not on today

Does anyone know who “A” is?

Did you find out who A is?

just end it already. spencer has a drug problem and hurt ali, but it doesnt explain how ali is still alive?! the book ends with ali’s twin sister being “A” but ill be damned pissed if thats how they do it in the show, BC THERE HAS BEEN NO MENTION BY A CHARACTER THAT ALI EVER HAD A TWIN. (ali mentioned a story about twins to hanna once, but thats it). Ali’s parents, brother, the girls, even ali would have said something about ali having a freaking twin, even if she (courtney dilaurentis) was “sent away for being the bad… Read more »

I haven’t read the books, so I don’t know but maybe no one but Ali’s Parents knew she ever had a twin to start with. Ali doesn’t even know about her twin sister. Her sister may be jealous of the life Ali had so she forced her to go on the run. Another option could be that Ali’s twin sister no one knew about did kill Ali and is A. She is pretending to be Ali so “Ali” can eventually come back home but the truth is that Ali is dead and her twin is going to start being here.… Read more »

the awkward moment when Spencer didn’t hurt Alison and she’s alive bc she wasn’t dead to begin with. clearly you don’t watch the show enough!! The amount of times Marlene has said that they AREN’T DOING THE TWIN THEORY is unreal!

This show is like a freaking addictive drug!!! Everytime I watch it I end up all worked up and start re watching key scenes, and it does not dissapoint, NEVER, it’s unbelievable! I loooove it, I can honestly say it’s my favorite show right after Supernatural…

Put them on Netflix … Because I don’t like watching it online.

[…] debut on January 8th, preceded by the first of the 11 remaining episodes of the third season of Pretty Little Liars. The latter has already been renewed for a third […]

YEAH!!! Glad to hear this show has NOT been cancelled! Hate it when the show goes on “break”…always afraid it won’t be back! Love it!!! Please do’t ever cancel it!!

A IS MONA HANNAH’S FRIEND