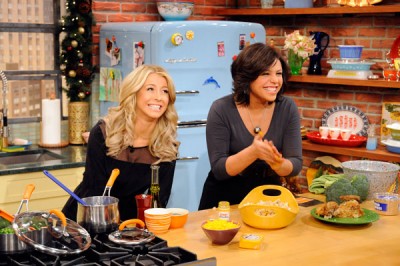 While The Nate Burkus Show and The Martha Stewart Show have both been cancelled, Rachael Ray’s syndicated series isn’t going anywhere.

The Rachael Ray show, which airs in daytime on various stations across the country, has been renewed for two more seasons. This new deal means that the series will stay on the air at least through the 2013-14 season.

LOS ANGELES – January 10, 2012 – RACHAEL RAY, the two-time Emmy Award winner for Outstanding Talk Show (Entertainment), has been renewed for two more years through the 2013-2014 season, it was announced today by Joe DiSalvo, President of Sales for CBS Television Distribution (CTD).

“RACHAEL RAY has been a solid performer in stations’ lineups and has had a recent surge in ratings. We’re thrilled to be taking the show through eight seasons,” DiSalvo said.

RACHAEL RAY is distributed and produced by CBS Television Distribution in association with Harpo Productions, Scripps Networks and Watch Entertainment. Janet Annino and Joseph Freed are the Executive Producers. CTD is a unit of CBS Corp.

What do you think? Are you a fan of Rachael Ray? Are you glad her show will continue?

Rachael Ray is a definite keeper. The interesting guests on a cooking show is great. The food is easy to do and demonstrated very well. Recipes are available on lines. Great stuff for afternoon TV.

I am not a big fan of the show-she cooks too much Italian-and as far as make overs when is she getting one-too long hair-hides face-not a fan of red-wears thick heavy clothes to hide figure-and whats up with all the BOOTS! Other than this Rachael is a delightful person.

I hope after the winter olymics are over with Rachel Ray will returned to Channel 4 Greenville,SC station. Have been watching her for the past 5 years. Trust Steve Harvey show will returned to the afternoon.

I’m concerned about the fact her show just disappeared. What’s the deal?

LOVE her show, watch it all the time, but THIS week is disappeared? It is always on
at 9:00 every day, and this week Let’s Make a Deal is on…?? Does she have a

I’m upset as well, we pay for all these cable channels and they keep switching the shows we enjoy around. What’s up with that.

I love her show, and am happy for her. I honed my skills as a cook watching her 30 minute shows and am forever grateful. That concept was brilliant! If only there were a vegetarian/whole foods version for weirdos like me 😉

We love Rachael here on the west coast but our CBS station has a new producer who is changing all the programming…moved her from 9:00 am to 2:00 pm and put on game shows in the morning. We want to learn to cook in the morning NOT in the afternoon…in the afternoon we want to go to the show to shop for the items to cook for dinner that she has taught us in the morning. I’ve complained numerous times to this idiot and would you believe (it shows what an idiot he is) he actually emails me back and… Read more »

I am so glad they kept the Rachael Ray show going. I was disappointed when I lost it after the morning shows. But, soon picked it up on other channels.

I wish racherl would cook dishes with fish ….I do not eat beef or pork and I have seen to many dishes with red meat. I eat a little lamb and a little chiquen, but I adore fish. Can you tell Rachel to help me?
Thanks
Good fortune on the next two seasons Rachel!
Sincerely
Montserrat

I live in Miami and I can not find the Rachel Ray that aired at 9:00 a.m. in which channel can I find her.

so i went on rachel’s web site and it looks like she is moving to a new studio and the new season starts monday so perhaps she is just not on this week because of that??? Lets hope!

gnr lovin life » I suspect your local affiliate has dropped or moved the show.

what happened to rachel ray show, can’t find her on any of our cable channels….so sad.

Rachael used to be on our local cbs channel 4 here in miami at 9am but now i cant find the show. I dont know if it is on at a different time or not on at all.

Well at least this one survived

i look up to rachael and am glad she’ll be on the air another two years.:)