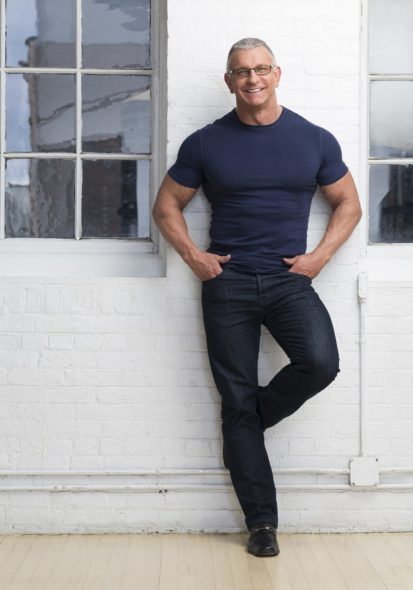 Get more information from this Tribune Media press release.

Irvine, a versatile celebrity chef with over a decade of television under his belt, has a strong following as a fitness guru and is a tireless advocate of our nation’s veterans, active duty military and military families. The series will showcase him providing help to families with his signature “tough love” approach to therapeutic work.

“The Robert Irvine Show” will be a strong complement to the successful daytime programs currently airing on Tribune Broadcasting’s stations, and we are excited to partner with Irwin Entertainment on this project,” said Sean Compton, President Strategic Programming and Acquisitions, Tribune Media.

“Robert has an impeccable reputation as not only one of the most successful and talented chefs in the world, he is also considered a role model and we are looking to embrace the philosophy that has made him a success, and use it to help individuals and families reach their full potential,” added John Irwin.

“Helping people overcome their most trying obstacles has been an important part of my process since day one,” added Irvine. “I’m thrilled to be working with Tribune, the CW, and Irwin Entertainment in bringing this exciting new talk format to life.”

“We are very happy to join with Tribune Studios and Irwin Entertainment to bring viewers ‘The Robert Irvine Show,’ which will be a great fit for The CW’s afternoon block and for our stations across the country,” said Chris Brooks, Senior Vice President, Network Distribution, The CW.

About Robert Irvine
With more than 25 years in the culinary profession, Chef Robert Irvine has cooked his way through Europe, the Far East, the Caribbean and the Americas, in hotels and on the high seas. As the host of one of the Food Network’s highest rated shows, Restaurant: Impossible, Irvine saves struggling restaurants across America by assessing and overhauling the restaurant’s weakest spots. Irvine was previously the host of Food Network’s Dinner: Impossible and Worst Cooks in America, has authored two cookbooks, Mission: Cook! and Impossible to Easy, and one healthy living book, Fit Fuel: A Chef’s Guide to Eating Well and Living Your Best Life. Irvine is currently on tour with his new, interactive live show Robert Irvine Live, and appears regularly as an expert guest on national morning and daytime talk shows. In 2015, Irvine launched Robert Irvine Foods, a company that features a nutritionally improved line of food products without compromising great taste. Irvine recently established the eponymously named non-profit organization, The Robert Irvine Foundation, in an effort to support military personnel and their families. Now in operation for a few years, the foundation continues to grow and assist those in need. In recent years he was honored with two very distinguished recognitions for his dedication to the armed services and our country’s heroes. He was first designated Honorary Chief Petty Officer by the U.S. Navy, and later that year awarded the Bob Hope Award for Excellence in Entertainment and Support of our Service Members – a distinguished Patriot Award bestowed upon him by the Congressional Medal of Honor Society. Continuing his support of the military, Irvine will soon become the first celebrity chef to open a restaurant, aptly named Chef Robert Irvine’s Fresh Kitchen, at the Pentagon in the summer of 2016. Also, Irvine just announced the launch of the Robert Irvine Magazine in May 2016 and the opening of a new restaurant in Las Vegas at the Tropicana in 2017. For more information on Chef Robert Irvine, visit www.ChefIrvine.com.

About The CW:
THE CW TELEVISION NETWORK, a joint venture between Warner Bros. Entertainment and CBS Corporation, made its debut on September 20, 2006 as America’s fifth broadcast network, and is the youngest skewing network, targeting a demographic highly sought after by advertisers. The CW offers a five-night, 10-hour primetime lineup that runs Monday through Friday. In daytime, The CW broadcasts a Monday through Friday afternoon block, and a five-hour Saturday morning kids block. For more information, visit www.cwtv.com.

What do you think? Are you a fan of Robert Irvine? Do you plan to check out The Robert Irvine Show when it premieres on The CW?

Robert Irvine is a chef – what qualifies him to give advice (if that’s what you call the words he throws at his guests) to these guests who appear on his show? He has proved himself on several occasions as a bully – yelling at his guests to “shut up, sit down” it is painful and embarrassing to watch. So I don’t. Please take this show off the air and put Robert back in the kitchen where he belongs.

Your show started out great. Then you started letting everyone talk at once. Then it seemed like you wanted people to get physical with each other.
The final straw was when you set up the food table & let everyone to have a food fight. You are a copy of Jerry Springer show , so I quit watching.

Hi Robert,
I like your show but please don’t have a show with fighting like Jerry Springer. I do not like his show due to all the fighting on it. And you’re so much more better than him.

Hi Robert I just love your show. I tune in daily to watch every episode after a long days work I love to sit back and watch the show. I really think that you’re doing a great job, I see and feel your passion for people. You care about people’s feelings and always try to get to the bottom of things. Keep up the good work and continued success with your show. Two thumbs up!

I love Robert Irvine; but his new talk show is disturbing. As an expert in domestic violence when I see him have couples where one partner is controlling or abusive only sets up victims for further violence. To tell victims that “no self-respecting woman…” blames the victim. And when one partner is physically abusive, and Robert is confrontational only setups that person to be further abused when the couple returns home. Please work with domestic violence organizations and/or experts in the field for the safety of the victims.

I can’t stand that show it seems to only be about gay black men or gay black women nothing of value to take from that show I hope it is removed.