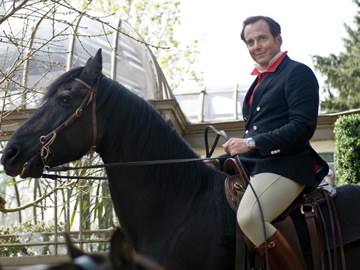 I love this show.
My family and I watch this at FOX.COM
I hate to see it go.
Running Wilde and The Good Guys, my favorite shows on FOX.
I think this show will get a following like Arrested Developmnet, another great show that died prematurely.
If Fox doesn’t keep the show go to TBS with Conan!

Called it! So called this one- after the first episode it became apparent that the majority of the world would not pick up on the subtle GENIUS of this show. Russell’s character is brilliant. Most would have to watch an episode twice to pick up on everything- this show is so DANG funny- I attribute it to being too smart for the masses. And yes, if you don’t think it’s funny- I don’t think you’re very bright. And I harbor a secret hate anyone that pronounces love for Arrested Development that didn’t watch it while it was on television.

This is so frustrating. It’s very rare to see a show as witty as Running Wilde or Arrested Development, but yet ,when they do come along, they almost always get cancelled. I don’t understand how so many of this reality shows managed to stay on a air, and a truly creative program can’t make it to a second season.

I feel like Im taking crazy pills! Did Jojo Anthrax just say even if they replaced Arnett w/ Cary Grant it wouldnt be funny! How old are you Anthrax? No wonder you dont find Arrested Development funny! The reason why these shows are getting canceled is because there are too many people like jojo in America and not enough people who “get it.” I agree with one of the posters who said hurwitz needs to go cable because there are just too many people out there that dont get and dont deserve his genius!

I thought Running Wilde was great because of the supporting cast, but the main storyline was obviously centered around the ‘to-be-or-not-to-be’ tension of a Russel/Arnett romance, and I didn’t have the patience to see that story played out. A lot of shows have been trying the Jim and Pam thing, and while the Office has survived since the resolution of that storyline, it’s really been limping along with nowhere left to go. I’m tired of watching two characters who are obviously going to end up together dance around it for three or four years. Running Wilde needed to pick a… Read more »

Alan’s comments are spot-on. The lack of chemistry between Arnett and Russell wasn’t merely lacking, it produced many scenes that were downright uncomfortable to watch. This in turn rendered the stories unseemly and both lead characters unlikeable, a fatal situation for anything this side of a Thomas Hardy novel…and you won’t be seeing many of those produced as television sit-coms. I suspect that something went seriously wrong at the point of casting. Might the actors have been hired based solely upon their resumes, rather than upon an actual evaluation of their on-screen interplay? Like two otherwise wonderful people who fail… Read more »

The show was clearly just starting to gain momentum. The Russell and Arnett combo took a while to hit stride but it was really starting to work. Supporting cast roles were really developing too. Show had a long-term story-board to it. Very disappointing.

It was a good show however the chemistry between the two leads never materialized. There were lots of awkward scenes where this became patently obvious. The supporting actors were excellent and their characters really showed through. It was great watching them film this show.

I’m very surprised at how many people are sad to see this go. I love Will Arnett and David Cross, and I absolutely love Arrested Development, but this show was simply not good. I’ve seen the first five episodes, and each one only elicits a chuckle here and there. I can’t quite put my finger on exactly where this show went wrong, but needless to say I’m not torn up about it getting the axe.

Drewciph, I agree that this show was nowhere near as funny as Arrested
Development, but no show is for that matter; however, it is certainly better than it’s current competition. I latched onto it because it is the closest thing to Arrested Development out now. Outside of Modern Family, this is really the only show that even gets a sporadic chuckle out of me.

Wrong time slot. The show is from the point of view of a young girl. The market for this show is young ladies. Especially since UGLY BETTY is done, pre-teen girls need a show to latch onto. It should have then been aired earlier than 9:30 PM on Tuesday & the too late midnight slot. Or on a Sundays.

this is herwitz’s fault for going back to fox, his shows would have a great chance to survive on a cable channel, he can’t draw in the viewer numbers for network tv. i knew this would happen and i’m pretty pissed about.

I was really looking forward to this show. Will Arnett was great on Arrested Development and pretty funny in his 30 Rock cameos as well.

But my goodness this is a bad, bad show. Not sure what I’m not getting out of this that the other commenters are. The scripts are bad, Arnett’s over-the-top style does not play well in this one.

I have really enjoyed this show and have been worried it would fail to make an audience because it’s too smart and witty for the average, mind numbed viewer. It’s a shame really. Will Arnett is one of the funniest people on television and I hope that he can find another show that will showcase his talent, on a network that will be willing to give the show a chance.

I don’t understand why Fox would cancel this show. This show is so funny and so good, I mean hello! Arrested Development anyone?? It is absolutely my favorite show of all time, and like AD, Fox did a HORRIBLE job promoting it. I see/hear about Glee, Bones, Fringe and even Raising Hope everywhere but never heard anything of Running Wilde. How can they promote only some tv shows and not the rest? Favoritism? Fox seriously can’t expect people to know about all their tv shows when they’re not letting the people know about their shows. It was a shame that… Read more »

This is the type of heady humor that had me rolling on Arrested Development. We have seen this before when that show was canceled, despite being the wittiest comedy since Seinfeld. The fact is that most Americans have a ****** sense of humor, they do not want to have to think to laugh, that is why they prefer laugh track ridden steaming pieces of crap like 2 and 1/2 men.