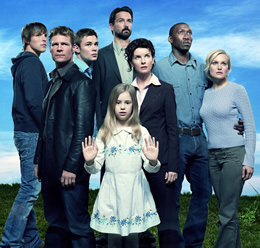 TV show description:
A group of 4,400 people are suddenly deposited, by what appears to be a comet, at Highland Beach near Mount Rainier, Washington. All of them had disappeared in a beam of light at various times as far back as 1946. None of them have aged or remember anything of what happened to them while they were gone.

A division of Homeland Security is set up to deal with the return and multiple agents are assigned to investigate. Two of them are Tom Baldwin (Joel Gretsch) and Diana Skouris (Jacqueline McKenzie). Their superiors on the project include Tom’s former friend, Dennis Ryland (Peter Coyote); Nina Jarvis (Samantha Ferris); and Meghan Doyle (Jenni Bairdand). Tom’s son Kyle (Chad Faust) has been in a coma since the disappearance of his cousin, Shawn Farrell (Patrick Flueger), but awakens when Shawn returns with the 4400. Both young men have developed the ability to heal people.

It’s later learned that the 4400 were abducted, not by aliens but, by humans from the future. They are returned with special abilities to help avert a catastrophe. Kyle, not Shawn, was supposed to have been taken and was intended to be the group’s leader.

Series Finale:
Episode 45 – The Great Leap Forward
Tom (Joel Gretsch) is put into a truck where Diana (Jacqueline McKenzie), Meghan (Jenni Baird), Marco (Richard Kahan), and Shawn (Patrick Flueger) are waiting. Marco injects Tom with Polonium that burns the nano-machines inside him and destroys the body snatcher. The process ultimately kills him but Shawn saves Tom by healing him. Tom still retains all of the memories from being marked and is horrified about what he’s done. He tells Diana and Meghan that he needs to go back to free Collier. Because they believe he’s marked, Tom says that he’s the only one who can succeed.

Danny (Kaj-Erik Eriksen) goes with his mother (Chilton Crane) to the hospital. He notices that people begin to exhibit the same symptoms and begin dying, as if they’d taken a promicin injection. Danny realizes that he’s developed the ability to spread promicin like an airborne virus. As a result, he ends up causing hundreds to either die or develop abilities. He goes to the 4400 center to ask for Shawn’s help, to tell him that he is the one responsible for the deaths/abilities, and that their mother has died. Kevin (Jeffrey Combs) gives Danny an inhibitor so that he’s no longer contagious.

Meanwhile, the people of Seattle are being infected. The outbreak wasn’t contained to the hospital and it’s spreading through the police force and the NTAC. The NTAC is forced to work with the Promise City residents to try to control the violence and chaos that is taking place.

Strangely, Diana is the only survivor at NTAC who hasn’t tested positive for promicin. Marco attributes this to the fact that earlier, Kevin had given her a series of promicin shots. This has somehow made her immune to it. She goes to the 4400 center and Kevin determines that an enzyme called ubiquinone is what is allowing her to resist the promicin exposure. Fortunately, the enzyme is contained in a common over-the-counter drug. Diana sends an order to have supplies of the drug made available to those in Seattle who have not yet been exposed to the virus.

Meanwhile, a marked Isabelle (Megalyn Echikunwoke) tracks down Kyle (Chad Faust) who has become the new leader of the Promise City residents. The marked are not pleased. The effects of Danny’s ability are ruining their plans to terminate 4400s and prevent people from gaining abilities. Tom returns to try and free Collier (Billy Campbell) but is unsuccessful. When he hears that Isabelle was sent to kill Kyle, he flinches and gives himself away.

Isabelle resists killing Kyle and instead returns to free Tom and Collier. She kills the marked bodyguards and Rebecca Parrish (Penny Johnson) but is ultimately killed herself. Tom and Collier escape and learn how the city has changed.

Back at the 4400 center, the inhibitor is working on Danny but the promicin is building up in his body. Since it’s no longer being released, it’s slowly killing him. He tells Shawn that he doesn’t want to stop taking the inhibitor because he knows that others will die. He would rather be the last. Danny begs Shawn to kill him and, heartbroken, Shawn complies.

With over 9,000 deaths and as many newly empowered people, Seattle has really changed. We see Meghan turn a pen into a flower, Agent Garrity (Kavan Smith) create an energy-clone of himself, and Marco unintentionally teleport himself from NTAC to Promise City.

Seattle is renamed Promise City and is now under the control of Collier and his followers. Maia remarks to Diana that she believes that it’s better this way. Kyle visits his father and tells him that, even though he has killed people, he must move on and leaves him a shot of promicin.
First aired: September 16, 2007

What happened next?
The show was cancelled after four seasons. There have been no reported plans to revive the series or wrap up the story.

Watching the 4400 again as it is fantastic although there is no ending lol.why do u ask ? Personally I think it’s up there with .walking dead .sons of anarchy just a really good programme pls pls finish off this TV show

I started watching The 4400 when it first rolled out as a tv show. I beleive the writers strike back them Has something to do with it’s cancellation. Somewhere between then and now I was able to watch all 4 season’s on Netflix because I was unable to finish it when it was originally in tv. I remembered loving the show. Now that I’ve seen all 4 seasons, I remembered why I loved it so much. Sadly I don’t believe it will ever come back. Not with the same cast anyway. It would be so hard to bring back the… Read more »

I am not understanding why this show was cancelled. We love this show.. So many unanswered questions. This needs to be brought back..

I came across this series after watching all seasons of The 100. I enjoyed how it was in the PNW. The story was very interesting. I would like to see it continued

That was a very good show, I have no idea why it would be canceled. There are soooo many unanswered questions. It kept me watching from the time I started it. What needs to be done to get it going again, I wanna see some kind of ending. At least another 2-3 seasons. Please?

Please I beg of u to start this back up please!! It’s my dying wish

I have to know if Baldwin took the promisin shot and what happens next!!! They’re breaking my heart here lol I instantly fell in love with this show!!! … Now it’s over…With no ending even … So devistating

I want this show to come back! I need to know what happened. Such a great tv series, it drew me in instantly.. Please bring back!

I wanted to know if the 4400 would ever remember being abducted and what was that like. We watched all four seasons within a couple of days – very disappointed it was canceled.

I really liked the series up until I found out it was cancelled without an ending i find it was pointless to even start making everything needs an ending nothing should ever be started unless you intend on finishing it.

I’m really sad that they didn’t go on and do season 5. Here I watched all of this to find they cancelled the show. I hope you decide go on and finish season 5 and not leave us hanging here.

I just hate that there is no ending to this show. I don’t watch that my shows but it’s one got me from the start. I found it on here, watched the entire series and was so disappointed at the end. Wonderful show and certainly had potential tocontinue. YOUR BAD!

Well I stumbled across the show about a week ago on Netflix, watched the first episode and was instantly hooked. I watched the show everyday after work, and on my off days. It took was so interesting that I watched all four seasons in 1 week. I am so very disappointed that there will not be a season 5. Not sure if anyone ever reads these reviews and I never have written one before, but this show was very good so I had to say something, they should rethink bringing back the show. Maybe better advertisement would help it last… Read more »