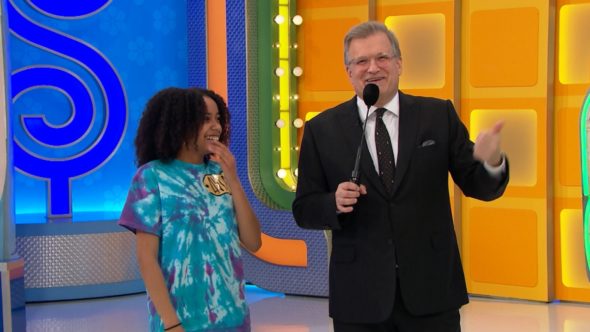 Both The Price Is Right and Let’s Make a Deal are headed to primetime and each will have three primetime specials on CBS. The first two specials will air next week.

In addition, the daytime shows are returning for their respective new seasons on November 16th. Hosted by Drew Carey, The Price Is Right returns for its 49th season while Let’s Make a Deal, hosted by Wayne Brady, is back for season 12. Both CBS game shows have had their sets significantly renovated to allow for COVID-19 safety precautions.

CBS revealed more about the primetime specials in a press release.

In addition to both shows revealing newly redesigned, socially distanced sets, LET’S MAKE A DEAL will feature a virtual wall with contestants from across the country and prizing that’s bigger than anything the show has seen in its 57-year run. Also, traders will have a shot at winning $100K hidden in golden envelopes throughout each special.

On Tuesday, Oct. 27, THE PRICE IS RIGHT AT NIGHT (8:00-9:00 PM, ET/PT) and LET’S MAKE A DEAL PRIMETIME (9:00-10:00 PM, ET/PT) air back to back, as they both salute front-line and essential workers by welcoming them to play on the iconic game shows. THE PRICE IS RIGHT host Drew Carey thanks the front-line workers for their dedicated service to communities while contestants have the opportunity to play favorite games, including “Cliff Hangers,” and win amazing prizes, such as luxury cars, a travel trailer and cash. On LET’S MAKE A DEAL, host Wayne Brady will perform an opening number, and the contestants will be comprised of essential workers. Traders will play “Smash for Cash” and “Car Pong,” and have a chance to win luxury cars, a recreational vehicle and up to $100K.

THE PRICE IS RIGHT AT NIGHT welcomes the cast of the hit CBS comedy THE NEIGHBORHOOD to “come on down” on Monday, Nov. 2 (8:00-9:00 PM, ET/PT). For the first time ever, stars play all six games as individual contestants when Cedric the Entertainer, Max Greenfield, Beth Behrs, Tichina Arnold, Sheaun McKinney, Marcel Spears and Hank Greenspan test their knowledge of prices for The Boys and Girls Club of America. In addition, fans at home will have the chance to win fabulous prizes, including a showcase, by entering at www.priceisright.com. Additional details for the final THE PRICE IS RIGHT AT NIGHT special of 2020 will be announced at a later date.

On Monday, Dec. 21, LET’S MAKE A DEAL PRIMETIME (8:00-9:00 PM, ET/PT) will be decked out for the holiday with Christmas decorations, and festively themed games and deals. On the third primetime episode, special guest Phil Keoghan, host of CBS’ THE AMAZING RACE and TOUGH AS NAILS, joins LET’S MAKE A DEAL PRIMETIME to present one lucky trader with an outdoor adventure-themed trip of a lifetime. The airdate for this episode will be announced at a later date.

In daytime, THE PRICE IS RIGHT and LET’S MAKE A DEAL premiere their 49th and 12th daytime seasons, respectively, on Monday, Nov. 16.”

What do you think? Are you a fan of The Price is Right and Let’s Make a Deal on CBS?

I am excited for both shows on their return. I have been watching TPIR since a little girl. Lol. Both are fun shows to watch and I love both game show hosts.

Both of those programs are my “feel good” shows! I have to watch them!

These are two of my favorites. I record them so I don’t miss a show

I think it’s great ! But what about George Grey? Is he coming back ??

Love both of these shows and enjoy watching now and in the future!

Thumbs up for these shows. We love them. We will tune in.

Love this show. I have watched it from it’s beginning.

I am 86, and my day does not start until I can watch The Price is Right. Thanks for finding a way to continue showing this entertaining program.

I have been to TPIR countless times , starting in 1976, been interviewed by different producer including you Stan…was there when Drew first started and when George interviewed for his job…can I Paleese come on down!