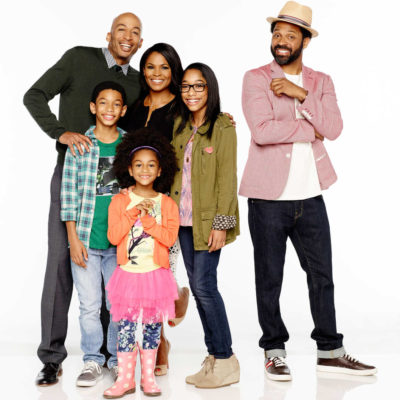 TV show description:
This comedy TV series is based on the 1989 feature film of the same name. It is the second Uncle Buck television series. The first ran for one season on CBS as part of the 1990-91 season.

Buck Russell (Mike Epps) is a fun-loving but irresponsible guy who needs a job and a place to stay. By happy coincidence, his brother Will (James Lesure) and sister-in-law Alexis (Nia Long) need his help.

Their nanny has just quit and they need someone to take care of their children, Tia (Iman Benson), Miles (Sayeed Shahidi), and Maizy (Aalyrah Caldwell).

Buck’s unconventional personality just may make him the right fit for the family — and they may be the answer to his problems, too.

Series Finale:
Episode #8 — Block Party
Buck takes the whole family back to his and Will’s old South Side neighborhood after he realizes the kids have no idea what life growing up there was really like.
First aired: July 5, 2016.

What do you think? Do you like the Uncle Buck TV show? Do you think it should have been cancelled or renewed for a second season?

Loved this show. So sad another black show was not given a chance!

Good show… Bring it Back!! Good shows always get cancelled!

This show needed a few extra weeks with families being on vacations and all this was a great show for evening tv watching with the family after a long hard day of work and school. I can think of a few other shows that are still on that need to be cancelled… But I guess they weren’t black enough to warranty the ax.. Shame on you…

Uncle Buck was a great show. It was cancelled too soon. Viewers that had not heard about the series didn’t have a chance to enjoy this comedy. It was smart and cute the way Mike Epps interacted with his Nieces and Nephew. The network should have tried this show on Friday. There is very little to watch on Fridays. Give the series another go round.

I really liked this show. I loved that this was a show I could watch with my family. I would really like to know why it was not renewed. The show was funny the cast was picked perfectly. Why was it not renewed. I think it should have been given more time to attack more of an audience. Me and my kids really enjoyed watching it together. It was a great show, Nia Long is one of may favorite actress. I would love to see the show come back.

I waited so long for this show to come on! And then when it finally came it was amazing !Andd now they’re taking it off this show run circles around Blackish how is that still standing! Please bring it back!

Hate that the show was canceled but not surprised. All black cased shows will never make it on the major broadcasting stations. Thank god for BET seems the only place today my child can see her people on TV in a good light. Not always the addict or criminal. Such a shame. I and my family thought it was a great great funny show.. Maybe BET will pick it up…

So upset this show was canned. I love this show! Please bring it back!

I think it should be renewed. I enjoy the show. Its very entertaining and funny. Everyone has a uncle buck

This show hysterical. Better than Black-ish! Didn’t even give it a chance. Typical.

Awesome show cancelled. Why was uncle buck cancelled it was a funny hilarious family show.

I actually love the show! I was a little concerned at first because for the first two weeks the show didn’t come on in it’s regular time slot, but other than that I think, if given the chance, Uncle Buck has the makings for a really good family sitcom! I hope the ratings were good enough to get a season 2!

This show is Awesome! Very funny. It is about time a Show like this is on ABC