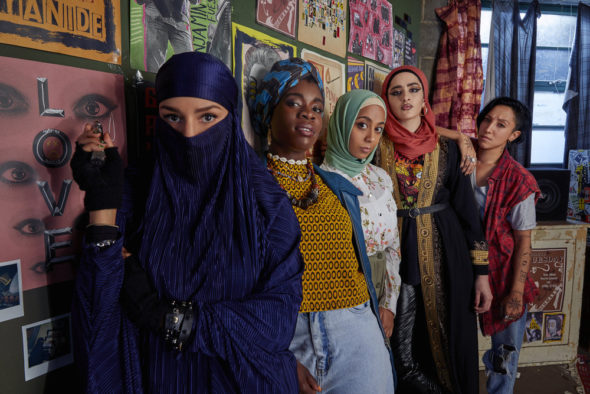 Peacock revealed more about We Are Lady Parts in a press release.

“Peacock Original music comedy WE ARE LADY PARTS, in association with Channel 4, will premiere Thursday, June 3. All six episodes will drop at once on Peacock.

WE ARE LADY PARTS (fka Lady Parts), is an anarchic, joyful and irreverent music comedy following a Muslim female punk band – called Lady Parts – who are on a mission to find a lead guitarist and maybe, just maybe, get a proper gig.

The series is written, created and directed by Nida Manzoor, who has drawn on her own experiences and taken inspiration from the rich and diverse cultural collectives and artists in London, and boasts an exciting ensemble cast of fresh British acting talent.

WE ARE LADY PARTS shows the highs and lows of the band – Lady Parts – as seen through the eyes of Amina Hussain – a geeky microbiology PhD student, who’s on the lookout for love and is recruited to be their unlikely lead guitarist. Lady Parts’ fierce and enigmatic frontwoman Saira sees something in Amina. However, the other members – taxi-driving drummer Ayesha, cartoon-drawing bassist and backing vocalist Bisma and the band’s wheeler-dealer band manager Momtaz – are not convinced she is right for their band. Amina has never met girls like this before, and she’s soon swept up in their joyful, anarchic energy and punk spirit. But she becomes torn and caught up between two different worlds – that of her more strait-laced university friends led by her bestie Noor and the world of Lady Parts. Will she be the key to the band’s success? And – will she finally find a husband?

WE ARE LADY PARTS is at once an unapologetically bold comedy and a joyful celebration of the richness and diversity found in contemporary London, whilst also an exploration on the fundamental questions of life: Who am I? Where and with whom do I belong? But ultimately it’s about funny women with real agency, forging their own lives and identities in a world determined to do it for them.

The series is packed with original punk songs and surprising cover tracks, written and adapted by Nida and her siblings Shez Manzoor, who also scored the show, Sanya Manzoor and Benni Fregin.”

Check out the trailer and poster for We Are Lady Parts below. 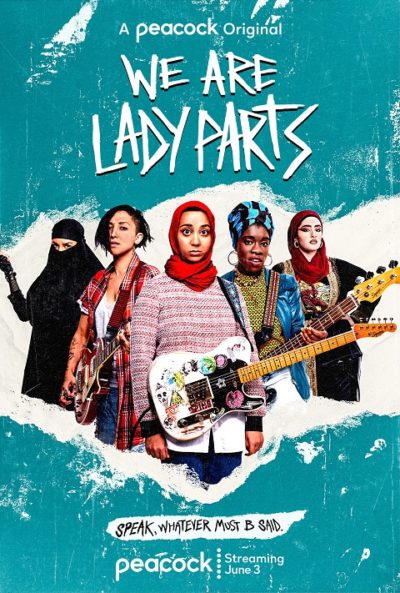 What do you think? Do you plan to check out We Are Lady Parts on Peacock?

This is a completely refreshing and surprising idea for a show – an all woman Muslim punk band – absolutely brilliant. It’s intense, it’s funny, outrageous, sometimes a little sad and very timely. It doesn’t explain Islam, the show just unfolding we see that each family has their own way of worshipping. The characters are instantly easy to care about and for musicians easy to relate to. Oh, the trials and tribulations of being in a band!