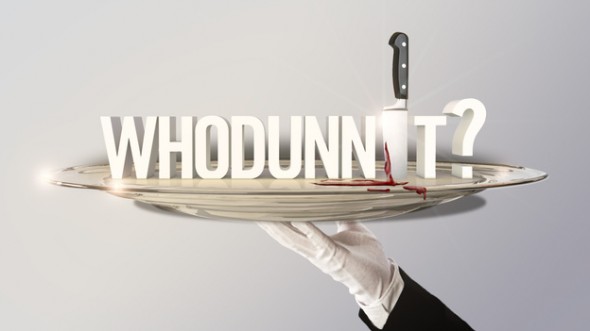 TV show description:
This interactive TV series puts 13 amateur sleuths’ investigative skills to the test in a mystery reality competition. Players use a variety of crime scene investigation techniques to carefully uncover evidence in a series of puzzling murders. Their goal is to ultimately reveal who among them is the killer.

Some players form alliances in the competition, while others choose to go it alone in their quest for the grand prize of $250,000. The contestants are guests on a glamorous estate called Rue Manor with a steward, Butler Giles (Gildart Jackson).

Each week they must solve a new crime in order to advance in the game. Failure to solve the crime leads to a player’s demise, until only three are left. In the final episode, one player unmasks the killer and takes home the $250,000 prize.

Series Finale:
Episode #9 — Golden Cuffs
After the smoke clears, Cris, Kam and Lindsey are having trouble locating Melina. The killer left a message for them in the living room and asks them to recall the three digit code that was given to them upon Sheri’s death. The killer has left the code 6-1-3 spread throughout the parlor.

There is a station set up for each guest. The station contains a game board with missing puzzle pieces. Kam is the first to place a tile on his station under “memory.” The killer has brought back each “killed off” guest and associated a task/riddle to them. The final three must perform the task and solve the riddle to receive a game piece. They will not know if they received the correct or incorrect piece until their enter board is completed.

The race has commenced. Cris gets a good scare tracking down a snake from Ulysses’ death. Lindsey is not sure if she grabbed the right bean from Ronnie’s hot tub. Kam is blazing through the challenge until he’s left to find an item in complete darkness from Geno’s station.

Kam is on the final piece of the puzzle and must find Giles’ employment contract in the parlor to prove Giles’ innocence. When Kam is able to finish the puzzle, he turns on the black light that reveals he has two of the puzzles wrong. Cris is the next one to finish and finds herself with 2 incorrect puzzle pieces.

Kam is the first one to finish his puzzle with all of the correct game pieces. He now has a head start on the final riddle. Cris is the second to finish her board. Lindsey is the last to finish and receives a different riddle than Kam.

Kam and Cris are at “the finish line” when they see Lindsey get killed off by an arrow. Cris then admits to killing off 11 straight guests. Kam is the winner of $250,000. He’s shocked that he had worked with the killer the whole time. Giles enters the room to give Kam his prize and the golden cuffs to arrest Cris. Two officers escort Cris out of the manor immediately.

Giles and Kam are now free to leave the manor. Kam gets a final farewell from the killed off guests and staff of the manor. He asks Giles to take him home. (Courtesy ABC.)
First aired: August 18, 2013.

What do you think? Do you like the Whodunnit? TV series? Do you think it should have been cancelled or renewed for a second season?

Keep the show going! It strengthen peoples mind! Great show, I love it. I think Melinas is the killer but who knows.

Really enjoy the show and can’t wait for another season…..LOVE IT……

Absolutely love the show. My husband and I agree to disagree about who the killer is. A show my husband and I can watch together. Please don’t cancel.

Love love it. There’s too much good shows that had been cancelled, pls not this one.

Love it it great

PLEASE keep this show! It is AWESOME. I was sucked in the second the aquarium crashed…

LOVE IT! IT GETS YOUR MIND THINKING!

I PERSONALLY LOVE THIS SHOW – GOT HOOKED ON IT EARLY ON AND LOOK FORWARD TO WATCHING EVERY SUNDAY NIGHT. I TRY TO SOLVE EACH MURDER AND GET IT RIGHT EVERY TIME…STILL TRYING TO FIGURE OUT WHO THE KILLER IS, MY GUESS IS RON, BUT COULD BE WRONG. LOVE THE SHOW!!!!!

My family loves it. We watched the first 2 shows last night and couldn’t stop talking about it. I think it’s very clever. Showing how the crime is committed helps the audience to get involved. Plus there’s the infighting among contestants who have to trade information. We hope it makes it.

I think it should be cancelled for playing a game with murder just so 1 person can win a quarter of a million dollars. Its so sick to me. Help me cancel it

You do realize that no one really died don’t you?