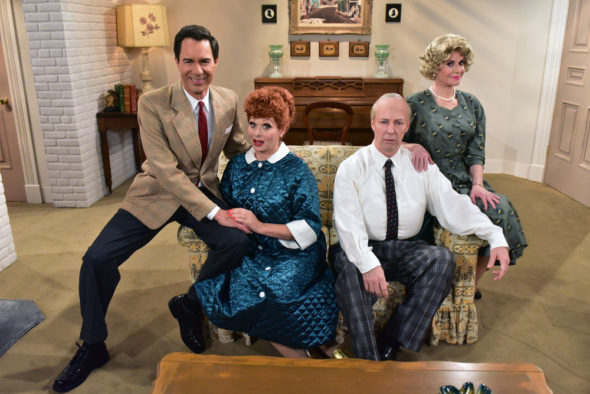 Will & Grace is currently airing its final season on NBC, and the series now plans to play tribute to another series before it ends. The cast has filmed a tribute to I Love Lucy. The episode is set to air this spring, and it is titled We Love Lucy.

During the episode, members of the Will & Grace cast will play Lucy in iconic scenes for the episode. Will is set to play Ricky in all three scenes while his cast mates each take their turn as Lucy.

Entertainment Weekly revealed that “Messing gets to play Lucy in a ‘Vitameatavegamin’ scene, Hayes will assume the title role in the chocolate factory, and Mullally will recreate the memorable grape stomping moment.”

The cast of the NBC series will have a very special guest during the chocolate factory scene. Lucie Arnaz, the daughter of will appear in the scene. She said the following about her appearance:

“I know my parents would be over the moon to be honored in this way and by such similar talents who bring the same kind of joy to audiences as they did in I Love Lucy. I’m thrilled to be invited to the party and will do my best to honor the memory of Elvia Allman’s iconic performance.”

What do you think? Are you a fan of I Love Lucy? Will you watch the Will & Grace cast recreate the iconic moments?

This will be great to watch. Love both shows.

No, not anymore. We even tossed our DVDs of the older shows. They have just ruined it for us.

Love both shows and long overdue

I don’t normally watch this show, but I want to see this episode.

No way, I love lucy is my favorite. They could never even touch base. Sorry

No I won’t be watching.

Cant wait im a Lucy fam i watch every show

I think it will be fun to see their portrayal of the iconic show. Debra Messing is a stunning “Lucy”. I’m so looking forward to it!!

I love the idea. Can’t wait to see it.