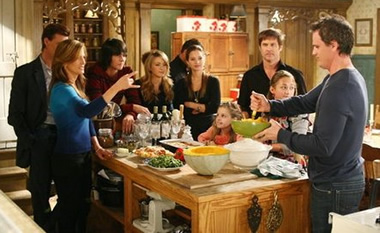 Last December, CBS announced that yet another venerable soap opera had been cancelled. After 54 years on the air, As the World Turns was winding down. As a treat for fans, the producers have been inviting some familiar faces from years gone by to return, like Julianne Moore, Larry Bryggman, Jennifer Landon, Jesse Soffer, Cady McClain, and Mary Beth Evans.

There was talk about the daytime drama possibly continuing elsewhere but it seems that won’t be happening. Yesterday, the cast and crew of As the World Turns taped their 13,858th and last episode in Brooklyn.

In a statement to EW, Brian T. Cahill, senior VP and managing director of TeleNext Media Inc., said, “Last December, when CBS informed us that they were canceling As the World Turns, we immediately launched a far-reaching search to find a new outlet for the show.”

He continued, “We have aggressively pursued network and cable outlets as well as syndication options, and have explored many innovative formats and relationships that we hoped would ultimately enable the future success of As the World Turns. Regrettably, we have not found an outlet or platform that will carry the show forward. This is an extremely disappointing outcome to what was a tireless and exhaustive pursuit.”

Cahill concluded, “While we are sad to see As the World Turns come to an end, we remain proud of the achievements the show has made over the last 54 years and are extremely grateful to the loyal fans who invited us into their homes every day. There is still much in store for the show’s well-loved characters throughout the summer, and although the show will go off the air in September, the remaining stories will honor the remarkable history of As the World Turns.”

What do you think? Are your surprised that the soap won’t be finding a new home? Would you follow the characters if they returned in another form — like books, audio dramas, or web shorts?

I started watching ATWT back in 1962 and didn’t miss a day. I would tape it and then watch the show while on my treadmill. Killed 2 birds with one stone. Soap opera and exercise. Then came the DVR which I loved and while I was on vacations I would come home and watch a week or more of the soap. Never missed. I will miss it very very much. In our paper it says The Price is Right is taking it’s place. No thank you. I would continue to watch if they could find a new home for the… Read more »

Boy is this a total disappointment… how CBS could do this I don’t know… These characters have been a part of our lives growing up… first my mothers and then mine and now my daughters… I can’t beleive she won’t get to continue to grow up with them like I did. All the CRAP they put on tv these days and all the reality things (so they don’t have to do any work writing or anything!) and then they take off all the good stuff! Its time you people go back and start working and bringing back something worth watching!… Read more »

I am extremely disappointed in yet another cancellation of a show that I grew up watching. All of the casts of both ATWT and GL were like family to me, and I am sad to see it all end. I wish the cast continued success and we will all miss you!

i grew up with the world turns my moomm my sister who pass away at 30 used to look at me my husband whonever look at soaps like it to it llike losing a friend orpart of the family. I do not look at any other soap.also with opra winfrea going off not much to watch on tv

I am still in shock that As the World Turns is being canceled. Especially with all the great stories; like the mysteries and love affairs with suspenseful endings; I can’t believe that no one would pick up this show. The actors and actresses are amazing and believeable! With such talent as theirs, how could a show end?! I feel as if my best friend just died! How could the higher ups let all this talent go!

farewell-cbs- first g.l.-now atwt- yet leave on bandb ? yand r i will watch but then to nbc or abc. WHY? YET YOU PUT ON TENNIS? WISH I WORKED FOR U AND I WOULD TELL U WHAT WOMEN LIKE!!!!! EVER CHECK WITH REAL PEOPLE THAT WATCH? WHO DO U THINK IS WATCHING WHEN U TAKE SOAPS OFF FOR TENNIS? I WOULD LIKE TO YOUR PROGRAMMER. BRING BACK THE PEOPLE OR POLICY THAT USE TO MAKE CBS A POWERHOUSE. DARE U TO RESPOND. HA.

I CAN’T BELIVE THAT THIS IS THE END OF ATWT AFTER ALL THESE YEARS. GUESS I’LL SEE IF THE OTHER NETWORKS BROADCAST A SOAP OPERA AT THIS TIME. OR JUST MAYBE TURN OFF THE T.V.! WE ALL GREW UP WITH THIS SOAP AND ITS ONE OF THE BEST ONES.

I was born in 1956. My mom and I started watching it together from the beginning.
All the characters have meant so much to me. I am so incredibly sad because the
show has been a big part of my entire life. I will love As The World Turns forever.

ATWT was, in my opinion, the best soap on television, at least it had a story line that kept people interested. Take the Bold and Boring off and replace it with ATWT, even if it only ended up being a 1/2 hour show, it is still 1000 times better than B&B. I am so tired of watching the Brook and Ridge saga I could puke. I can’t stand to look at half of the cast of B&B anymore. Like the rest of the large money making corporations in the country get rid of jobs to make yourselves more money right… Read more »

I am deeply saddened at the loss of ATWT. I can not imagine that rating were so low that they took it off the air. I guess CBS will learn what low ratings are when no one is watching the time slot once filled by ATWT. I can only hope another network will see the diamond that is this show and capture the huge fan base as CBS & P&G go down the tubes together. I watched this show with my mother! I am only 1 year older than this show… I guess quality television is a thing of the… Read more »

I cannot believe As the World Turns is ending I have watched this for 35 years watch this with my mom and now my kids watch it I love the show the game show that took Guiding Light is pathtic and now all we have left is the young and Restless which I love also. Seems t0 me if CBS was gonna end yet another show it should have been the Bold and Beautiful It is boring. All the women share each others men brook has slept with them all I think and her daughter is turning out like her… Read more »

I watched ATWT with my grandmother, my mother and sisters and will miss this show. I don’t care what they put on the air to replace it; I too, will not watch what takes ATWT time slot. I also don’t watch bold and the beautiful. I guess for me the only soap for me to watch is Y&R. The only blessing I can see in the cancellation of ATWT for me is less television to watch. I wish the writers, production team, actors and actresses and everyone else that made ATWT a first class soap a huge Thank you. I… Read more »

I have been watching As The World Turns ever since I can remember. It has been my favorite soap. No matter if I was in Hawaii,Tx.,or San Antonio I have always tuned in. I will be very sad not to see all the charachters. I will have to find something else to do.

tommorrow is going to be a sad day for all the atwt fans.I know I won’t watch what will take it’s place,just as I have not watch the game show that took over gl’s time slot.Starting Monday I will watch y&r,then turn my tv off as I can hardly stand b&b anymore. With all the women sleeping with every one’s elses husbands or boyfriends,it just gives me a hugh headache..I will be on the lookout to see where all my favorite characters land and start watching that show. CBS,you have really messed up this time…