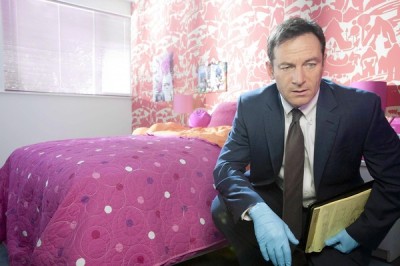 Tomorrow night, NBC unveils their latest 60-minute TV show, Awake. It airs at 10pm — a timeslot that has become a big problem for NBC after the failures of The Firm and Prime Suspect. Will audiences find Awake engaging enough to keep them up and watching?

In Awake, Police detective Michael Britten (Jason Isaacs) is returning to work after being in a car crash with his wife (Laura Allen) and his son (Dylan Minnette). After the accident Britten discovers that every time he goes to sleep he switches between two realities, one in which his wife died in the crash and one in which his son died. The cast also includes Wilmer Valderrama, B.D. Wong, Steve Harris, and Michaela McManus.

Here’s what some of the critics are saying:

NY Daily News: “NBC’s NEW Awake is an intelligent, thoughtful, provocative and well-acted show that by summer is likely to be just a memory. To be blunt, it requires more work than the average TV viewer is likely to put in. That isn’t to knock either the show or the average viewer. It just doesn’t feel like a fit for prime-time network TV.”

NY Times: “It’s not easy to keep track of what’s happening on Awake, but it won’t put viewers to sleep.”

USA Today: “No one wants to return to the color-by-numbers plotting of Diagnosis: Murder, but there is such a thing as demanding too much effort from an audience without sufficient reward. Glum, grim and increasingly confused, Awake qualifies. And while this isn’t really the show’s fault, it has the whiff of a program bound to exit before it answers the questions it raises.”

Washington Post: “Something about Awake is a bit too drowsy. British actor Jason Isaacs (Lucius Malfoy to Harry Potter movie fans; also memorable to those who enjoyed Showtime’s Brotherhood) plays Michael with an understatedly macho ache that often fails to fully captivate the camera’s attention. Jones and Wong, meanwhile, are excellent and even vaguely sinister as the dueling shrinks.”

LA Times: “Awake, whose first hour has been available online since mid-February, finally makes its television premiere Thursday on NBC. I have been waiting for this moment since last summer, since the pilot first went out to the press. Notwithstanding a certain stylistic chilliness and my sense of it having been pitched on the back of Inception, it promised to be one of the year’s best and most interesting new series. Having seen four episodes now, I’d say the promise has been largely kept.”

What do you think? Do you think Awake is worth watching? If you’ve seen it, will you watch again?

LOVE LOVE LOVE this show. I have not been a tv watcher for quite some time but this show intrigues me. I dvr it and enjoy watching it twice as to not lose track of whats happening. I would also like to say I was a big fan of journeyman that lasted one season. I still watch it on line since I don’t have much choice on whats good on tv anymore. Please keep this show on the air and bring back Journeyman while you’re at it.

“there is such a thing as demanding too much effort from an audience” – USA Today “To be blunt, it requires more work than the average TV viewer is likely to put in..” – Ny Daily News There is such thing as under estimating, and insulting viewers. Quotes like this do it. The same people who review these shows, and catch a couple episodes, are the same people who bash mind numbing easy to follow stories. It is such a dissapointment for viewers like myself who love to follow a great complex story line. I cannot even watch television or… Read more »

I’ve enjoyed watching this show thus far and hope NBC will renew it and see where the writers take us on this unusual journey……
I am really getting frustrated with many of the major networks starting new shows and not allowing enough time for them to gain momentum. Just when you start getting into a show then….they pull the plug! This will eventually backfire as people will stop watching new shows just to wait and see if they’ll last before investing any time in them!
So in short….KEEP AWAKE ON!!!

i liked it, and the preview for the 2nd show looks even more interesting. maybe it’s not a psychological event after all! has anyone thought of that?

I can understand why some American critics might not like the show. It involves some thought. I believe the more educated will appreciate Awake.

Great show! I will definitely be watching it going forward.

We enjoyed the first episode of the show last night. If we were not watching close, then it can be be confusing, but paying attention, it was no problem.

[…] night, NBC unveiled their newest drama, Awake, on television. The network had made the episode available for viewing online two weeks earlier in […]

I’ll give it a look since it appears to require some intelligence. But perhaps the twist is not he is awakes in one reality and asleep in the other, but perhaps he is in a coma in both, switching back and forth and both his wife and son both survived the accident and are alive.

I was thinking that would be the case, too! It’s really the explanation that makes the most sense… only, I would think most minds would imagine being with both his wife and son (i.e. everyone survived the crash). This guy must have some major issues for his subconscious to come up with this…

Funny my husband and I had the same thought. I hope it turns out a little less predictable though…..I hope it is renewed so we can continue to be intrigued!

One of the best shows I have seen in awhile. I LOVE IT ….here that NBC I LOVE IT…..

The USA Today review snippet sums up how I’m likely to feel about this show, based on the promos. I’ll give the first episode or a few a try, but it’s likely to go the way of The Firm (I can’t stand it after 10 minutes of the first episode) or The Finder (convinced I won’t watch it, only to actually like it after a few episodes, then it goes on “hiatus,” presumably to-be-cancelled, due to low ratings).

I get a kick out of how a couple of the reviewers believe the series will not succeed because network viewers are too stupid. Of course, we have been shown over and over again how intelligent and complex shows fail to keep viewers.

I’m still gonna watch this show, but assuming that they renew up all night, the office, Whitney and Law & order SVU, this will be the deciding factor if I’m gonna watch something else new this fall on the network. They renew it I’ll give the hannibal series a try at least, if they ax this one, then goodbye nbc, you’ll with fox, the networks I won’t be watching new shows on.

Ever since they axed ER that timeslot has really been vacant, nothing seems to stay here for very long. Southland, The listener, Prime suspect, The apprentice, even sitcoms were there once. I still think they should have done whatever they had to do to keep the original cast on ER. Would that mean the show would still be on? Maybe, maybe not, but still they would have had better luck now, call me crazy.