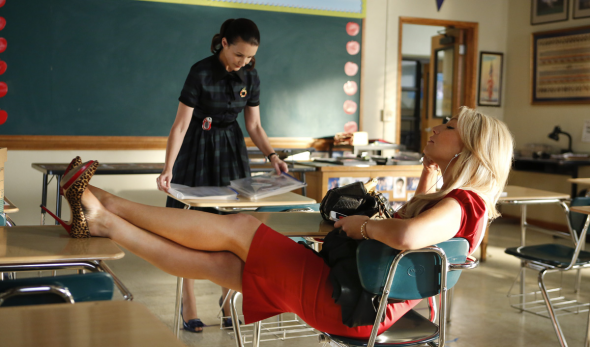 It looks like CBS has decided to burn off the leftover episodes of Bad Teacher. The sixth episode of the cancelled sitcom has been scheduled for Saturday, July 5th.

Here are the episode details:

MEREDITH AND GINNY ONLY HAVE 24 HOURS TO FINISH THE STUDENT YEARBOOK, BUT TO MEET THE DEADLINE, MEREDITH FIRST HAS TO FIX GINNY’S BROKEN HEART AFTER SHE SUFFERS A SUDDEN BREAK-UP, ON “BAD TEACHER,” SATURDAY, JULY 5

“Yearbook” – Meredith agrees to help Ginny finish the student yearbook when she learns staff volunteers receive a free Botox treatment, but they struggle to meet their 24-hour deadline when Ginny is distracted by a sudden break-up. Also, Principal Carl helps Kim study after she fails her teacher’s exam, on BAD TEACHER, Saturday, July 5 (8:00-8:30 PM, ET/PT) on the CBS Television Network.

What do you think? Are you glad that CBS is airing the leftover episodes? Do you like this show?

glad it got cancelled. last episode I watched was the sleepover. she was very nasty on that one. was not funny at all. she should be sarcastic not a b…h. glad its gone

I just realized bad teacher was cancelled.I’m bummed out the cats was really starting to get along good together it looks like it could have been a funny show CBS should reconsider

Yes! I love this show! I didn’t realize it aired in the spring and fizzled. I thought it was brand new, and that I finally had a sitcom to look forward to watching again. Back to reality TV I go 🙁

Funny show cbs should give it a chance.

Best show! Rad cast and super hilarious. Super bummed that this show is cancelled. This show didn’t get a fair chance. I don’t even remember it being promoted! I actually happened to somehow watch the first episode and from then on got hooked. I had to DVR…. Not sure is that made any difference. But come on! The cast was amazing! I hate you CBS!

CBS didn’t really give either show a chance. They’re quick to cancel shows that are actually really good. I love both FWBK and Bad Teacher!

Is this why CBS is never #1 they terminate great shows w/out giving them a chance?

Love this show!! So bummed it was cancelled 🙁

I love this show, I’m so happy they’re showing more episodes. I wish some other network would have picked it up.

YES!!! Favorite show hands down! I hope they leave the show on from now on!

Airing a network pattern would be better than this horrendously bad show.

Yeah, I guess, but I would rather they aired leftover episodes of Friends With Better Lives.

Me too! FWBL was HILARIOUS!!

I am glad they are airing the remaining episodes of Bad Teacher, but if I had to choose between the two I wish they would have brought back FWBL!!

Yes!! So glad they’re going to air the remaining episodes!!